Idea for an international coinage was conceived by Messrs. A. Kosoff and Hans M. F. Schulman in 1945 when the United Nations came into being, their thought being that if all nations had a common currency in addition to a common language (a subject then being discussed), they could work together in greater harmony.

A gold piece was to have been presented to Trygve Lie, then U.N. secretary-general, on steps of City Hall, New York City. It was hoped that after the New York presentation, the matter would be referred to an appropriate U.N. committee or to the World Bank and some action, leading to an interchangeable coinage, taken. The presentation, however, was not made.

A specimen had been sent to the Director of the Mint, who opposed its use, stating that it was Treasury Department policy to discourage manufacture of any item which looked so much like a coin. The plan was dropped while in its embryonic stage and dies were destroyed, according to Kosoff. The issuers had in mind a 1-ducat size coin. The pattern struck was not necessarily to be considered as a standard. 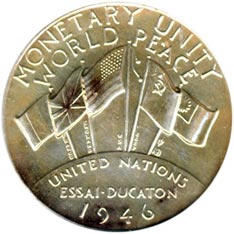 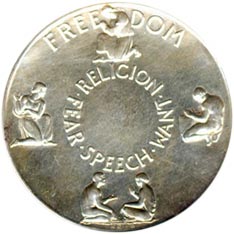 Obv. Flags, l. to r., of France, England, United States, U.S.S.R. and National China (the Big Five); above, Monetary Unity / World Peace; below, United Nations / Essai • Ducaton / 1946. At the base of each flag is written the nation with China being written in Chinese characters.
Rev. Four allegorical figures around (at positions of 12, 3, 6 and 9 o'clock) representing the Four Freedoms; above, Freedom; in center, around, Religion • Want • Speech • Fear •