Colorado State Legislature failed to appropriate funds for participation in Century of Progress Exposition, Chicago, 1933. Many Denver and other civic organizations, knowing that 32 or more other states were to have official exhibits, believed that Colorado's non-appearance would be detrimental to its industrial welfare.

About $60,000 was estimated to be necessary to assure proper representation and only about 30 days then remained in which to raise it. A plan to produce and sell "Colorado Dollars" was devised and adopted by Colorado Century of Progress Commission to accomplish this objective.

On Feb. 1, 1933, Commission announced that one-ounce discs of pure silver would be sold at $1 each, silver costing but 28 cents an ounce at that time. Next day Gov. Ed C. Johnson of Colorado purchased first token and general sale was started throughout state. The discs were advertised and sold elsewhere by Colorado State Board of Immigration, Denver, for $1.25 each.

Planchets were made by Sachs-Lawlor Co., Denver. The H. H. Tammen Co., also of Denver, struck the pieces. All have plain edge. First three types have incuse letters and figures. Type IV is embossed.

Only 300 issued. Placed on sale Feb. 2, these were sold quickly to members of Chamber of Commerce and of Denver Real Estate Exchange and to their friends. 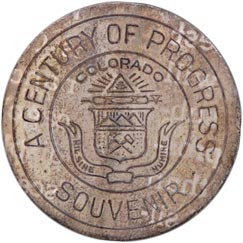 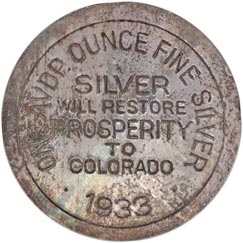 Obv. Between two circles, • A Century of Progress • above and Souvenir below; State Seal within inner circle; above, Colorado
Rev. Within circle, around • One Avdp. Ounce Fine Silver •; below, 1933; across, in center, Silver / Will Restore / Prosperity / to / Colorado

Sale of this type started Feb. 6, 1933. Of 2,000 struck, only 700 were issued and remainder melted down for striking of fourth and final type. Some writers have reported that 2,700 were struck. The 2,000 figure is that of the Colorado State Board of Immigration. All reports agree on the 700 figure. 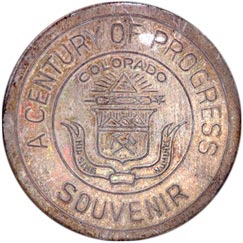 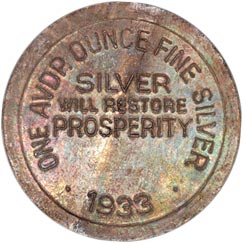 Obv. Same as Obverse of No. 867 [A Century of Progress].
Rev. Similar to reverse of No. 867 [Silver / Will Restore / Prosperity...], except to Colorado omitted. These words eliminated because they tended to localize importance of silver.

Sale began Feb. 16. Of 2,000 struck, those unsold were melted (number unknown to authors), together with Type II pieces not issued, and silver used to strike Type IV. 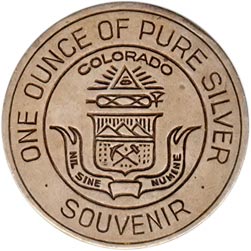 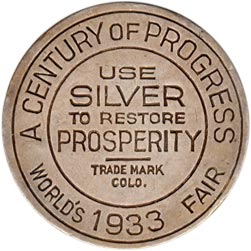 Total struck reported to have been 10,000. Numbers issued and melted (if any melted) unknown to the authors. Mining scene on obverse of this type is somewhat similar to that on Lesher Dollars of more than 30 years before. Colorado does not appear above Seal on reverse of Type IV. 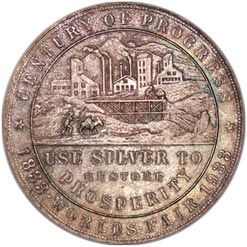