The Loyal National League was organized in early 1861 by Northern patriots to counteract propaganda of the Copperhead movement by Southern sympathizers in the border areas of Missouri, Kentucky, southern Illinois and southern Ohio.

Leagues, formed in several northern cities, had as their purpose the implanting of loyalty and the rooting out of disloyalty to the federal government; Loyal National League demanded that southern sympathizers be dismissed from government employment. The propaganda war continued after Lincoln's inauguration and until Ft. Sumter was fired upon April 12, 1861, an action that unified public opinion in the North. Designer, die sinker, manufacturer, and issuing agency unknown. 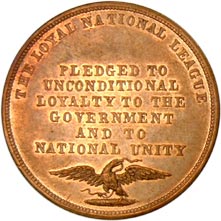 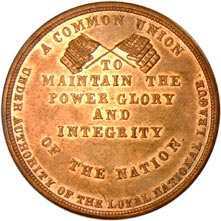 Obv. Near upper edge, around, The Loyal National League; across, Pledged to / Unconditional / Loyalty to the / Government / and to / National Unity; below, spread-winged eagle, shield on breast; beaded border.
Rev. Near upper edge, A Common Union, crossed U.S. flags below; beneath flags, To / Maintain the / Power Glory / and / Integrity / of the Nation; below, around, Under Authority of the Loyal National League; beaded border.