Extensive research develops little information on this medal. It is obviously commemorative, pertains to a national commodity and is not a store card.

Tin ore is found in North America only in small quantities and history of tin mining in United States is both sporadic and brief. The Pittsburg & Mexican Tin Mining Co., name of which appears on medal, was still in existence in 1894 but apparently did not survive very long and its total production of tin must have been quite modest. There is no record of corporate charter in any of states where such application most likely would be made, nor does company name appear on any list of defunct corporations maintained by stockbrokers specializing in those securities. (See also "Tin Mining in the United States" by Messrs. Melvin and George Fuld in The Numismatist, February, 1953). 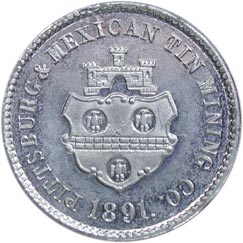 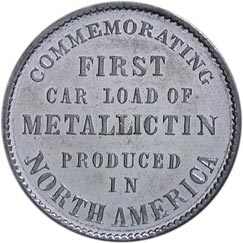 Obv. In center is a shield with castle-like edifice above; around Pittsburg & Mexican Tin Mining Co. 1891.
Rev. Across Commemorating / First / Car Load of / Metallic Tin / Produced / in / North America