This was Official Medal, presented to officials and guests at dedicatory ceremonies Aug. 1, 1889; designer and number of pieces struck unknown but today, piece is extremely rare.

Construction of monument, "on summit of a hill back of...center of...town," became "national undertaking." During 30 years from laying of cornerstone to completion, contributions received from 11,000 individuals "in this and other countries"; acknowledged by engraved certificates; those above certain amount, with small bronze replica of monument. Late Massachusetts Governor Oliver Ames donated $31,300, entire cost of Statue of Faith; 1878 Massachusetts legislature granted $10,000 for Statue of Morality; Congress $15,000 for Statue of Liberty. Pilgrim Society continues to maintain statue and grounds. 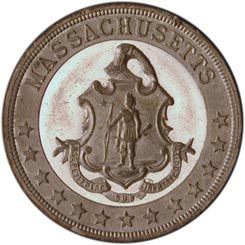 Obv. Monument in center; above, around National Monument; below * Plymouth, Mass. *; beaded border.
Rev. State Seal within center circle; outside, above Massachusetts; below, around are 13 stars; beaded border.