Organization: Society founded by Dr. Bennett in 1943 as non-profit association; dedicated to advance science and art of good land use. Later renamed Soil and Water Conservation Society, which "serves as an advocate for conservation professionals and for science-based conservation practice, programs, and policy." By 2000, worldwide membership numbered 5,000, with 75 chapters throughout the U.S. and Canada.

Comment: Dr. Bennett joined old U.S. Bureau of Soils, Washington, DC, in 1903; worked diligently for more than 25 years against unnecessary "soil washing." Later, he became head of Soil Conservation Service, serving until 1951. Through his efforts, Congress made first appropriation of $160,000 in 1929 to investigate erosion and by 1960 Federal program reached into every county with 2,700 soil conservation districts functioning under leadership of state governments. Agency renamed on Oct. 20, 1994, to Natural Resources Conservation Service to emphasize broader mission of conservation in all areas including water, air, plants, and animals, not just soil.

Total issue limited to 2,200 pieces in two strikings of 1,200 and 1,000. First lot distributed free to registrants at 14th Annual Meeting of Society as above indicated; second lot struck later and "made available for $1 to members and friends of Society who wanted a copy." In September 1960, Society advised that no additional medals would be struck and that dies would be destroyed. 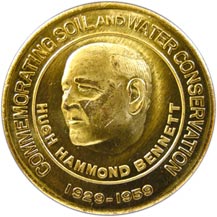 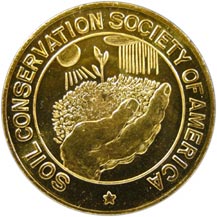 Obv. Male head l., below Hugh Hammond Bennett--within inner circle; outside around Commemorating Soil and Water Conservation; below 1929--1959
Rev. Official insignia of Society (handful of soil up to sun and rain)--in center circle; outside, around Soil Conservation Society of America with star below.