Participants: At Governor's request, with Congressional Resolution, President Eisenhower on Feb. 14, 1958, called for observance of centennial by American people, invited all states and territories to participate. At exposition, Alaska, Arizona and Washington took major parts with others exhibiting "their products and crafts"; many Federal displays but no Mint Exhibit.

Medals: There was no "national medal" nor any Official Medal sponsored by Centennial Commission. There was an Official Emblem or Seal which appears on many of following private issues.

In center is scene portraying products and industries of Oregon; to upper l. is small State Seal; below scene is small covered wagon and team proceeding r.; below on ribbon Frontier of the Future / below ribbon Centennial--all within center circle; outside at top, around Oregon * 100th Anniversary; to l. horizontal 1859, to r. horizontal 1959; at bottom Celebration. 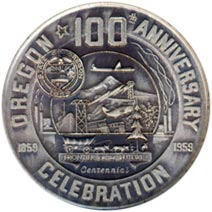 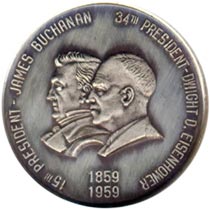 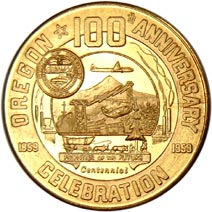 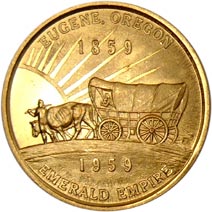 Obv. Official Centennial Emblem, per above.
Rev. In center is a covered wagon proceeding l. into setting sun; above Eugene, Oregon / 1859; below wagon 1959 / Emerald Empire 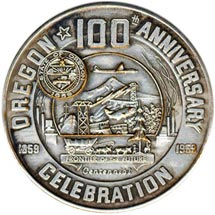 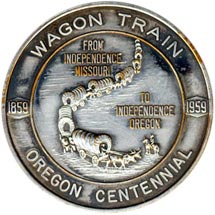 Designed and issued by Salem Numismatic Society; 6,000 struck in Silver-plate and 9,000 in Gilt Bronze; sold for 75 cents and 50 cents, respectively. Sponsor did not authorize striking of any sterling Silver pieces but later "heard from other sources that about 25 were struck." 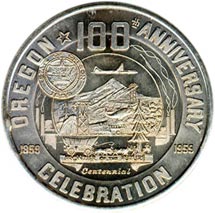 Designed and issued by Richard Smith, Roseburg, OR; 5,000 struck; sold for 50 cents. 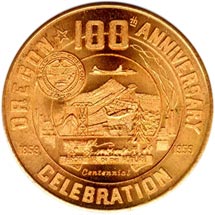 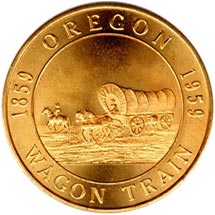 Obv. Official Centennial Emblem, per above.
Rev. In center circle is a covered wagon proceeding l. with outrider; outside, around 1859 Oregon 1959 Wagon Train

Struck as trial pieces to interest cities, counties, merchants and others to use reverse for individualized purposes. Issue was comparatively small and most specimens have disappeared. 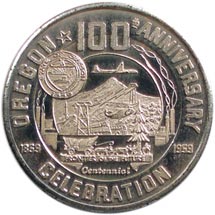 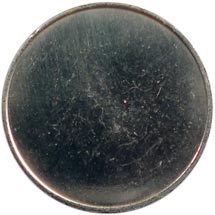 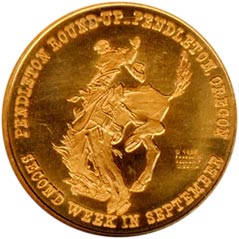 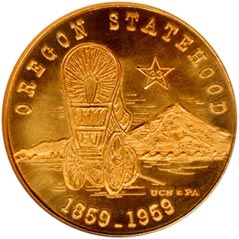 Issue consisted of following, all 38mm:

* Some Goldine were attached to prize saddles presented to winning contestants in Rodeo.
** Darker than other two Copper.
*** Lighter in color than antiqued Silver-plated.

Issued by North Clackamas County Chamber of Commerce to defray "expenses of Centennial events...in county"; 20,000 struck; sold for 50 cents. On both obv. and rev., in a center circle, is replica of Beaver $10 gold piece of Oregon Exchange Co. (see same in any complete catalogue of U.S. coins) 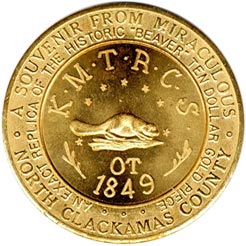