Purpose: To commemorate 100th anniversary of Comstock Lode, first significant discovery of silver in United States which "directly created State of Nevada" in 1864.

Site, Dates, Participants: Principally Virginia City and Storey County, June 12 to 14, 1959, but since "silver was discovered in every county" in state, celebration actually was state-wide affair.

Comment: Producing $300,000,000 in silver during first 20 years, and over billion in all, including gold, it is claimed that United States owes its "solvency...during Civil War to the...Lode." Yield ran high as $3,500 per ton but early as 1880, ore was disappearing. By the 1950s, commercial mining work had ceased due to "grade of ore remaining, low price of silver and...unsuitable economic climate..." From peak of 35,000 people, Virginia City now has only 1,500 but as tourist attraction still draws thousands each season. Its pioneer newspaper, Territorial Enterprise, hosted in its columns, Samuel Clemens first signed story "Mark Twain"; newspaper ceased with the Feb. 11, 1970 issue.

Medals: Official Medal authorized by 86th Congress, designed by Committee and struck at Philadelphia Mint from "silver furnished by Nevada..." Issue limited to 1,000 pieces; sold out for $5 "by midsummer 1959." Congressional designation as "national medal" permitted striking of additional number "upon approval of issuing Commission" but Centennial Committee officially advised on June 7, 1960 that no more would be struck.

In a letter dated May 27, 1960, Roy A. Hardy, Chairman of the Nevada Silver Centennial Committee, advised an interested buyer, "They were not sold in quantity to either individuals or dealers, so I am unable to refer you to any source where they may be obtained." In consolation he enclosed "a key chain to which is attached a replica of the Commemorative Medal. The only variations are that the medallion is not silver and is drilled so that it may be used on the key chain." 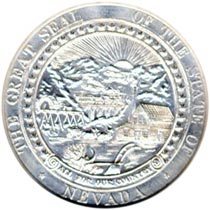 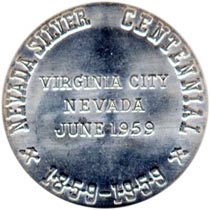 Obv. State Seal within circle; outside, around The Great Seal of the State of; below * Nevada *
Rev. Across Virginia City / Nevada / June 1959; above, around Nevada Silver Centennial; below, crossed pick and shovel each side of 1859--1959