Purpose: To bring to Alaska each year "the priceless privilege of hearing and performing in great orchestral, choral and choral-orchestral music"; to give all music lovers "a profound insight into its spirit and structure" through concerts, recitals, lectures and public and private instruction.

Site, Dates, Attendance: Concerts and recitals held in Community College and in Sydney Laurence Auditorium, Anchorage, in June each year; 1960 attendance over 7,000.

Visiting artists perform both as soloists and teachers of 140 singers in Community Chorus and of 40 odd members of Anchorage Symphony; supplemented by seminars, TV lectures, etc. 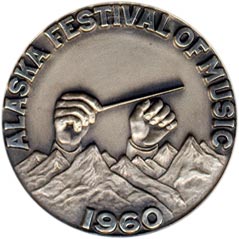 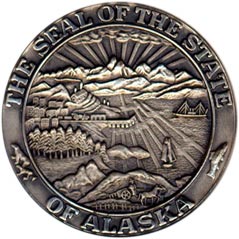 Obv. State Seal within center circle; outside, around The Seal of the State of Alaska; two small animals at l. edge; small fish at r. edge.
Rev. In center, behind and above mountains, are hands of orchestra conductor holding baton; above, around Alaska Festival of Music; below mountains 1960 (This is Festival Seal).