Purpose: To celebrate 50th anniversary of Boy Scouts of America.

Organization: This was fifth and largest national encampment or Jamboree. "Two years of...work by hundreds of men" required to convert open range to Jamboree City, principally a tent city but with huge arena, roads, water mains, electric lines, own post office, bank, newspaper (90,000 copies daily) and stores, called Trading Posts. Jamboree was self-sustaining; financed by private contributions and $50 fee paid by each boy in camp. Of latter amount, $13 per capita was refunded.

Participants: Encamped were 56,377 Scouts from all 50 states, including 650 from 26 foreign countries.

Fiftieth Anniversary Jubilee Jamboree opened with pageant, "Spirit of America" with 6,000 Scouts participating before audience of 75,000. During week there were field sports, conservation educational programs, and daily demonstrations of Scouting skills. President Eisenhower and Lord Baden-Powell, son of founder, were distinguished guests. Called "largest camp for boys ever held in U.S."

Medal: This was Official Jamboree Medal; designed by National Council; 65,000 pieces struck in oxidized Bronze by Robbins Co.; sold at Jamboree Trading Posts "to boys who wished to bring them home as souvenirs." Supply Service Division of National Council advised that all medals were delivered to Boy Scouts of America and entire quantity sold at Jamboree. Shortly after Jamboree closed, however, specimens became available elsewhere but at substantially increased prices. 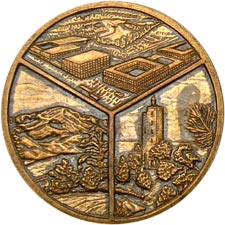 Obv. In center circle is a Scout Shield with rays; above shield, around For God and Country; below shield to l. 1910, to r. 1960; below a line Boy Scouts of America / 50 / Fifty Years of Service; outside circle, at top National Jamboree, at bottom Colorado Springs
Rev. Entire surface is divided into three (3) equal segments; in upper is view of Air Force Academy buildings and grounds; in lower l. is Pike's Peak; in lower r. is Will Rogers Memorial Tower.

NOTE: A 39mm medal with similar designs and a reeded edge was produced for collectors in the 1980s as part of a set of restrikes of Boy Scout Jamboree medals. The restrike was produced in pewter and brass, and should not be confused with the original No. 577 produced in 1960, which is smaller, bronze and unreeded.