Extensive research fails to establish origin of these issues. Some feel they were produced and sold to assist in defraying portion of giant cost of catastrophe but any revenue derived would have been insignificant. More creditable is statement of San Francisco Public Library that "reliable local opinion is that production of such medals probably was a transitory commercial venture with no official connection."

This was most severe earthquake in history of United States; affected area 150 miles both north and south of city, east to Nevada and west to Honolulu. Starting about 5 A.M., April 18, 1906, series of 2 main shocks and 25 additional ones shook San Francisco alone; resulting fires raged 3 days, destroyed 500 city blocks, over 28,000 buildings; almost 500 people killed, 2,500 seriously injured. San Francisco loss estimated at $250,000,000; total $350,000,000. One of "wonders of conflagration" was saving of U.S. Mint Building, "where fire was fiercest," by 250 employees and soldiers. 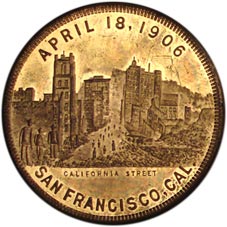 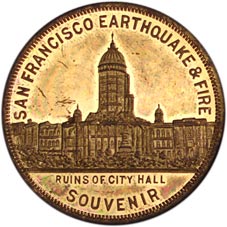 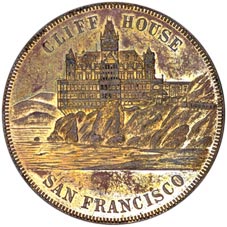 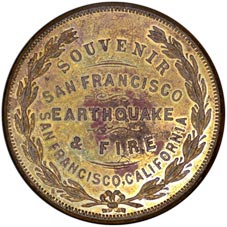 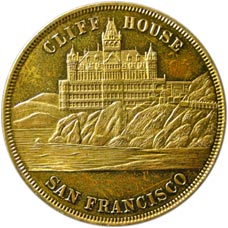 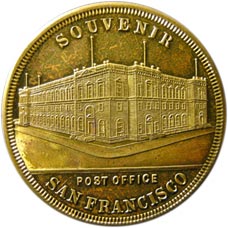 Obv. Same as obverse of No. 343 [Cliff House].
Rev. Edifice; above, around, Souvenir; beneath horizontal line below edifice, Post Office; below all, around, San Francisco; beaded border.