Comment: Explorations of Lt. Pike (1779-1813) are basic United States history. Steadily promoted in U.S. Army, he was Adjutant and Inspector General when killed in action in War of 1812 during victorious assault on York (now Toronto), Canada, April 27, 1813.

Medals: Official Medals authorized by 59th Congress; designed by C. E. Barber; struck at Philadelphia Mint. Mint records reveal issue limited to 250 Silver proof, 250 Gold-plate, 4,200 gray-oxidized Silver and 6,250 Bronze; sold through local banks and Chamber of Commerce; Bronze for 50 cents, Silver for $1; 65% of all were looped. Some authorities insist these quantities were ones "ordered," that issue actually was smaller. In any event, of total struck, large portion was delivered by Mint apparently too late for sale; they were stored and forgotten for 49 years.

In 1955 these 4,000 pieces were found in basement of old First National Bank Building during demolition. Historical Society of Pike's Peak Region, Inc. directed their sale to help finance 1956 Celebration (no new or additional medals struck for latter event). Again, most were mounted but loops were "expertly removed to make...acceptable to Collectors" and many do defy detection.

Colorado newspapers of 1906 cautioned public to buy "only the genuine authorized medal" as an imitation had appeared on market. This piece, too, is listed here. (See also "The Southwest Expedition Medal" by C. S. Yowell, The Numismatist, issue Jan. 1956). 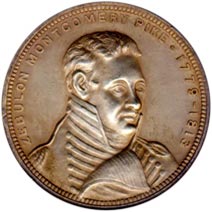 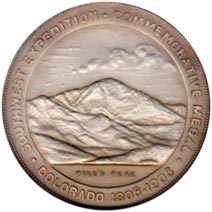 "IMITATION" ISSUE (per above) 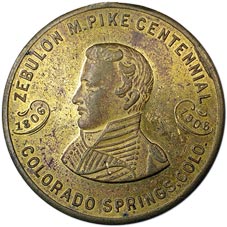 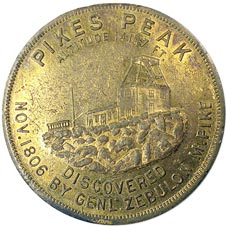