Participants: Fourteen states "officially" by own legislative action; four more "unofficially." While Congress granted financial aid, it did not authorize President to extend foreign invitations. However, official invitations from exposition co. were transmitted to foreign exhibitors at St. Louis in 1904 via U.S. Department of State and Louisiana Purchase Exposition Co. "In this manner and through other channels, a very respectable representation" was obtained from sixteen nations. Many Federal displays included Mint Exhibit.

Medals: For reasons unknown, Mr. Kenney failed to list Official Souvenir Medals authorized by Exposition and struck in Mint Exhibit on grounds. Farran Zerbe reported these were of "1 type, 2 metals and 3 finishes," per below, that "issue was small compared with similar products and all were sold prior to close of Exposition." At same time (1906), he stated Silver medal was "very scarce" even then. 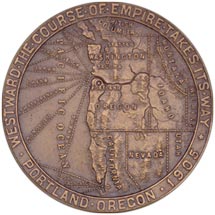 Obv. Full female figure between two full male figures, all striding and facing rear toward setting sun and ocean in background; 5 stars above; above Sighting the Pacific 1805; around Official • Souvenir • Lewis • and • Clark • Centennial • Exposition; below all June--October / 1905
Rev. Map of Pacific Coast (British Columbia to San Francisco) with various worded trade routes to west and, vertical, Pacific Ocean--all within center circle; outside, around • Westward • the • Course • of • Empire • Takes • Its • Way *; below Portland • Oregon • 1905

First two medals below were only ones listed previously for exposition; obviously, they were not Official issues. 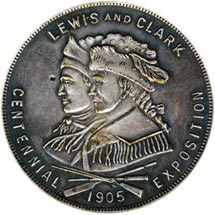 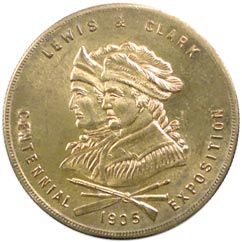 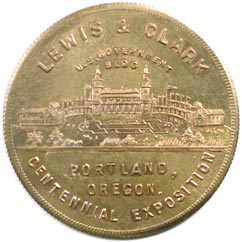 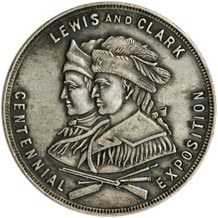 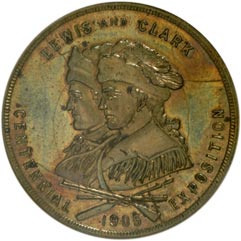 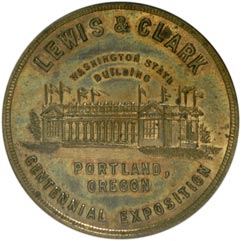 Obv. Same as obverse of No. 333 [Lewis and Clark, no date].
Rev. Similar to reverse of No. 333 [Edifice] except Washington State / Building above edifice (instead of U.S. Government / Bldg.)