Organization: Early as 1900, Association for Preservation of Virginia Antiquities passed resolution "to celebrate in some befitting manner." Conceived originally as "great historical and educational Exposition...with no hope or purpose of vying with industrial fairs of past." Feature was to be International Naval, Marine and Military Celebration so that "all navies of all Nations" could honor "the hardy mariners" who established Colony.

Site: Sewell's Point, Norfolk County, 7 miles north of Norfolk --about 340 acres with frontage of 5,000 ft. on Hampton Roads; now U.S. Naval Base. (Jamestown Island, itself, is situated 30 miles up James River to northwest.)

As to exposition itself, 25 states participated, 21 and 6 Latin American countries erecting own buildings. Industrial exhibits finally reached total of almost 2,000 but with fewer than 30 foreign ones. Historical societies from everywhere most active and permanent memorial dedicated on Jamestown Island. Federal displays included Mint Exhibit.

Medals: Official Medals below were struck in Mint Exhibit on grounds. 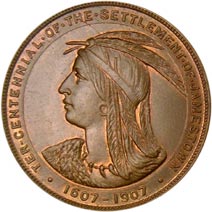 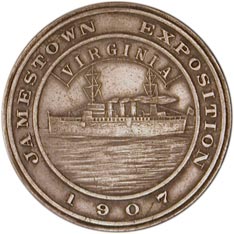 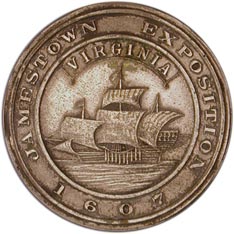 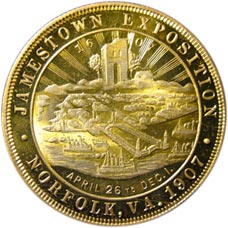 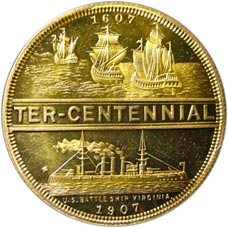 Obv. Exposition grounds and buildings, above l. 16, above r. 07, below April 26 to Dec. 1--all within center circle; outside above, Jamestown Exposition; below • Norfolk, Va. 1907 •; beaded border.
Rev. At top 1607, sailing ships below; across, on band, Ter-Centennial; Battleship below; in small letters below, U. S. Battleship Virginia; below 1907; beaded border. 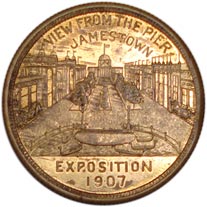 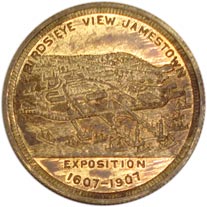 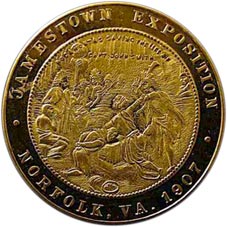 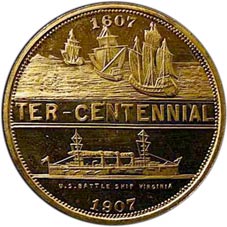 Obv. Intricate scene of woman intervening in an execution; Above, microscopic Pocahontas Saving the Life of / Capt. John Smith--all within center beaded circle; outside above, Jamestown Exposition; below • Norfolk, Va. 1907 •; beaded border.
Rev. Same as reverse of No. 359 [Ter-Centennial].