Medal commemorates completion of first transcontinental railroad May 10, 1869. Authorized by 41st Congress, designed and engraved by William Barber, it was struck originally in 1870 in Bronze at Philadelphia Mint; became one of Mint Medal Series (Miscellaneous No. 13).

Representing one of most important economic accomplishments of 19th century to that date, Central Pacific Railroad from east and Union Pacific from west were joined at Promontory, Utah, May 10, 1869. Territory of Utah, created September 1850, was not yet of age and Utah statehood still was more than 25 years away. 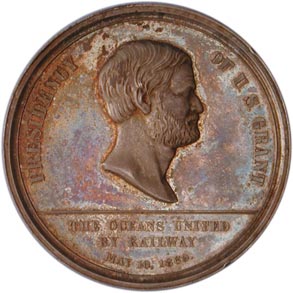 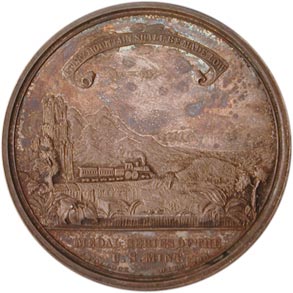 Obv. Naked profile bust of President U. S. Grant facing r.; above around Presidency of U. S. Grant.; below bust is a line across and below line The oceans united / by railway / May 10, 1869.
Rev. Landscape scene with mountains in background and train proceeding r., Pacific Ocean at l. border, Atlantic Ocean at r. border; above, on ribbon in clouds, Every mountain shall be made low; below scene, at l. microscopic W. Barber, F.; below Medal series of the / U. S. Mint., small J. Pollock director.

NOTE: 20th Century restrikes are known to exist, struck in yellow bronze with matte surfaces. Caution should be taken to assure originality.