Following 1860 election of Abraham Lincoln as United States President, South Carolina was first state to secede from Union on Dec. 20, 1860. Bombardment of Fort Sumter in Charleston Harbor was first clash of armed forces of North and South.

Defended by a Federal force of 75 men under Major Robert Anderson from April 12 to 14, 1861, against Brigadier Gen. P. G. T. Beauregard and 8,000 Confederates, Fort was surrendered finally with no casualties to either side.

Although unsigned, these medals appear to have been engraved by George Hampden Lovett. The reverse of the Type II medal is also found paired with several other obverse dies as political or campaign medals. 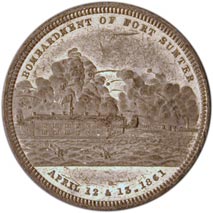 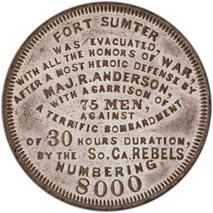 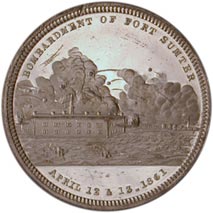 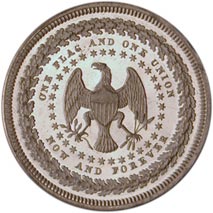 Obv. Same as obverse of No. 11 [Fort Sumter].
Rev. Eagle within circle of 34 stars; outside, above around One Flag and One Union; below, around Now and Forever; outside all, circle of leaves; beaded border.