While medal purports to commemorate "championship" fight Feb. 14, 1896 at El Paso, Texas, boxing records contradict this. Bob Fitzsimmons, one of all-time great professional pugilists, won world middleweight championship 1891 and world heavyweight title March 17, 1897 at Carson City, Nevada. Weighing only 167 pounds, he knocked out James J. Corbett in 14 rounds. After losing heavyweight title in 1899 to Jeffries, he held light heavyweight championship from 1903 to 1905 when past 40 years of age.

At turn of century, professional boxing was illegal in most states. Apparently fight was forced out of El Paso; actually held Feb. 21 at Langtry, Texas, 100 miles to east on Mexican border; middleweight title not at stake as Australian Peter Maher was over-weight. Billed as "international affair," they fought for $10,000 side-bet; Maher knocked out in 95 seconds.

Fact that medals bear incorrect information would attest to their early origin. It appears that this issue was first reported as late as 1940 (in The Numismatist, December 1940). 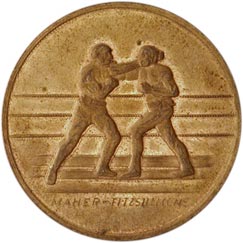 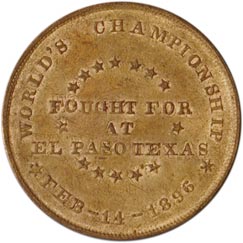