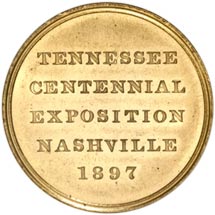 Research fails to establish origin of this medal. It obviously was an early issue as reverse lettering anticipates June 1, 1896 exposition opening which was deferred, as above noted. 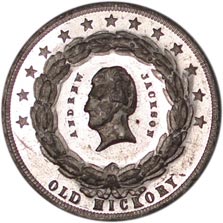 Obv. Male bust facing l.; to l. of bust, Andrew; to r. Jackson--all within closed center wreath; above wreath, around are 13 stars; below wreath Old Hickory; beaded border.
Rev. State Seal in center circle; outside, around * Centennial of the Admission of Tennessee in to the Union, (just above State Seal) of States; below State Seal, around Held at Nashville June 1. 1896.; beaded border.