Purpose: To exhibit "resources and possibilities of the Cotton States"; to emphasize revival of cotton industry following Civil War; "to stimulate trade with Spanish-American countries" and to show an Atlanta which had "risen from its fires and ashes" of 1864.

Designed and struck at U.S. Mint, Philadelphia. On obverse, rays of fire under bole of cotton represent desolation of crops resultant from Sherman's march to sea. Phoenix rising from flames is symbolic of resurrection of industry. Henry W. Grady, on reverse, was editor of Atlanta Constitution; his writings and speeches helped reunite people of North and South after Civil War. 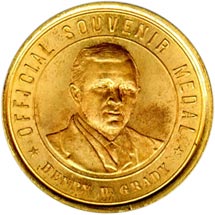 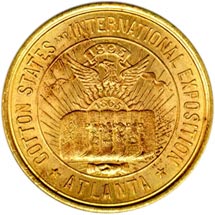 Obv. Within circle a bale of cotton; on l. end K / 124; above, 1865; above that, phoenix rising from flames; above phoenix (on ribbon) 1895; below bale, clasped hands; outside, around Cotton States and International Exposition; below * Atlanta *
Rev. Bust, within circle; outside, around Official Souvenir Medal; below * Henry W. Grady * 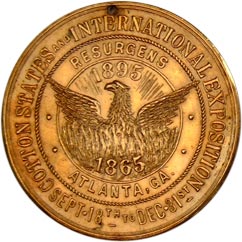 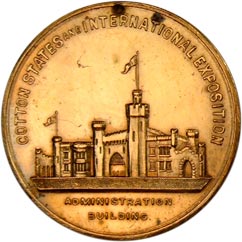 Obv. In center, phoenix, wings outstretched, rises from flames; rays and 1895 above, 1865 in flames below; microscopic Childs below l. and Chi below r. of date--all within circle; within outer rope-like circle and inner circle, at top Resurgens, at bottom Atlanta, Ga., two dots on each side between; wing tips of phoenix extend through second circle; border legend Cotton States and International Exposition Sept 18th to Dec. 31st
Rev. Edifice; below Administration / Building; above, around Cotton States and International Exposition 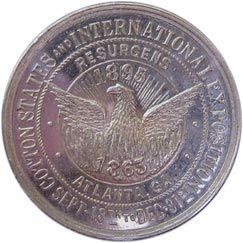 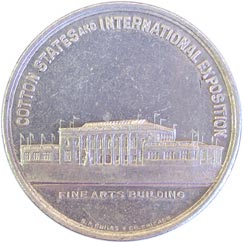 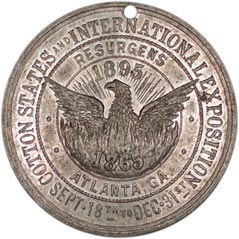 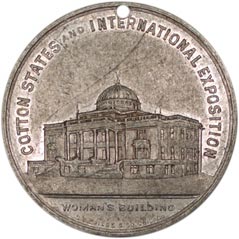