During closing days of World's Columbian Exposition or on Oct. 28, 1893, Chicago Mayor Harrison was shot down in doorway of his own home by Patrick E. Prendergast who sought revenge for failure to obtain city job. Assassin was convicted and finally hanged.

Most medals such as these were of an official nature. Local statues and monuments usually were financed by public contributions. Considerable revenue often was derived from sale of medals and souvenirs commemorating event. In this case, Type I piece below obviously was issued for such express purpose. Harrison's statue stands near Washington Blvd. in Union Park, Lake St. and N. Ashland Ave.; sculptor was Frederick C. Hibbard; unveiled June 29, 1907. 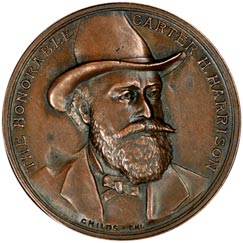 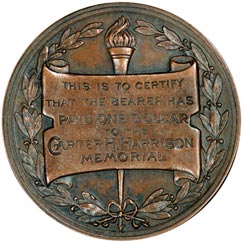 Obv. Male bust facing r.; above, around The Honorable Carter H. Harrison; below, microscopic Childs, Chi.
Rev. Within garland of leaves (with berries), on plaque This is to Certify / That the Bearer Has / Paid One Dollar / to the / Carter H. Harrison / Memorial. 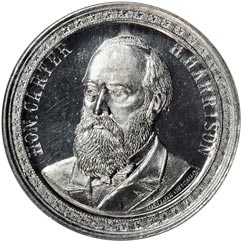 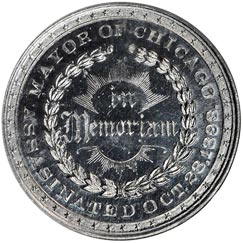