Denounced and distrusted widely during his early years, ridiculed for numerous business failures, Garrison (1805-1879) later was revered by many as leader of Abolitionist movement. Born in Newburyport, he learned printing; started papers there and Bennington, VT; failed three times; served seven weeks in jail in Baltimore as result of libel suit. Moving to Boston, Garrison printed first issue of Liberator Jan. 1, 1831. Articulate, dedicated and fearless, he also denounced alcohol, war, tobacco, freemasonry, capital punishment and imprisonment for debt. At first, few were with him on question of slavery. State of Georgia offered $5,000 for his arrest; northern textile manufacturers feared his movement might halt cotton shipments from South; church leaders preached against him--"proved" by Biblical quotations that slavery was good; even Anti-Slavery Society, formed 1832, split over his methods. Throughout Civil War, Garrison continued to print his paper; closed down in 1865, his job done.

This medal pertains to Newburyport statue but in Boston there are others too. Most issues of this general type were of official nature. Local statues and monuments usually were financed by public contributions. Considerable revenue often was derived from sale of medals and other souvenirs commemorating event. 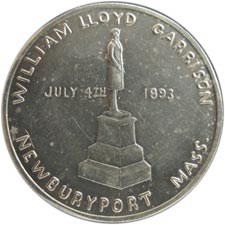 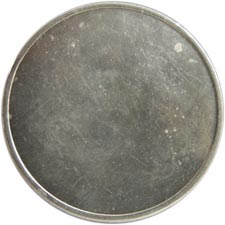 Obv. Statue; to l. July 4th, to r. 1893; above, around William Lloyd Garrison; below statue, around Newburyport Mass. UNIFACE.