Irish-born American actress Ada Crehan (1860-1916) was known especially for Shakespearean roles; played over 200 parts in company of Augustin Daly between 1879 and 1899. In those days it was not unusual for boom-towns of West to attract famous theatrical persons in touring companies. A misprint in a program had her name as Ada Rehan and this became her stage name. This medal is likely part of the 1893 World's Columbian Expo. Ada Rehan was the model for the statue that was in the Montana Building at the Columbian Expo which is depicted on the reverse. 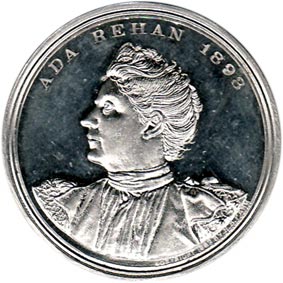 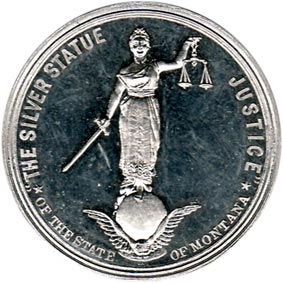 Obv. Female bust l.; above Ada Rehan 1893; below bust, microscopic (incuse) Copyright 1893 by R. H. Park.
Rev. Full female figure facing; standing on globe which rests atop spread-winged eagle; in r. hand is sword, in l. hand are scales; above, around "The Silver Statue Justice"; below * of the State of Montana *