To some, the Whipple Dollar represents an uncompleted shell or embossed store card, lacking the back which was used for advertising. It is the belief of shell card adherents that this was one of the last embossed store cards to be made. Reason for its being unfinished, they say, was that about the time of its intended issue, the Federal government clamped down on its use because of its resemblance to the dollar and as a result it never was released. That it is patterned after the 1878-type dollar cannot be questioned, and it bears the actual denomination One Dollar and the words Legal Tender, as well as the eagle.

Those who would call it a so-called dollar refer to it as the Whipple or Bland-Allison Trade Dollar, and give it various issue dates, ranging from 1885 to 1900. Some say it was issued during the Panic of 1893 and was, therefore, depression money. Most place the date at 1896 and class it as a private issue of that campaign year, along with the Tiffany and Gorham Bryan Dollars, or with the private issues of Joseph Lesher in 1900 and 1901. Although some sources assert that the piece had a limited circulation before being prohibited by the government, others say it never was issued.

The piece was made for C. M. Whipple and Co., Westfield, MA, makers of whips, who long since have been out of business. 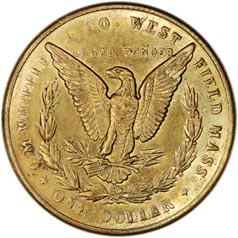 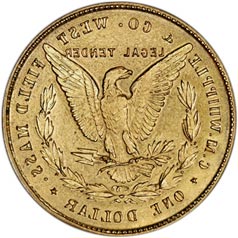