Aaron White, eccentric Connecticut lawyer, believed that the financial strain of the War of the Rebellion would bankrupt the United States and that as a result, all paper money, "green-backs" in particular, would become worthless. He hoarded hard money as insurance against such catastrophe.

White struck his satirical pieces to show contempt for green-backs, printed to finance the war. Specie or hard money was so scarce when the war commenced that the government had to print money to meet its needs. White remembered the sus-pension of specie payments by U.S. banks and the resultant hard times of 1837 and 1857. Also in his memory was the issue by wildcat banks and private concerns of an avalanche of paper money, value of which fluctuated greatly, and much of which was worthless. He wished to refresh the memories of the people to the curses of paper money. 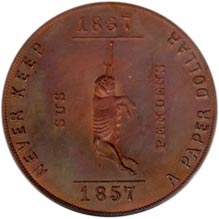 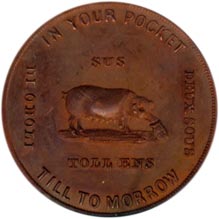