Medals, obviously commemorating 50th anniversary of Declaration of Independence, long have been prized possessions in American numismatics but research still fails to establish origin. Because of national importance of event, collectors and dealers alike recommended that exception be made here as to holed material and urged issue be listed. 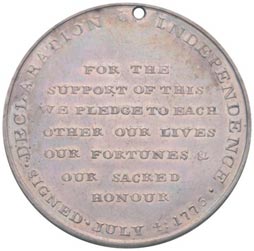 Obv. Spread-winged eagle facing l., stands on shield amid flag and implements of agriculture and war; at lower r., Cr; above eagle, all-seeing eye casts rays below; outside, above around National Jubilee.
Rev. In 7 straight lines across, For the / support of this / we pledge to each / other our lives / our fortunes & / our sacred / honour; outside, around Declaration of Independence Signed July 4: 1776