Purpose: To exhibit "industry of all nations for...comparison, competition, instruction and encouragement."

Organization: First "International" exposition held in United States. Following 1851 London Crystal Palace Exhibition, New York group, including Horace Greeley, chartered "The Association for the Exhibition of the Industry of all Nations"; built Crystal Palace at cost of over $600,000. No direct grants from city or state but former did lease ground free for five years from 1852 on condition that (1) building be "chiefly of iron and glass," (2) admission fee not exceed 50 cents. Federal government provided "neither financial support nor official sanction" but charged no duty on goods imported for exhibition purposes, which practice still prevails today.

Comment: Construction openly copied London's Crystal Palace on smaller scale (about 200,000 sq. ft., including annex vs. 750,000 sq. ft.); critics described as "an exaggerated greenhouse." Despite lack of Federal support, U.S. President Franklin Pierce and Secretary of War Jefferson Davis attended opening where 23 foreign countries were represented among 4,800 exhibitors. Domestic emphasis was on machinery; first passenger elevator and first sewing machine displayed. Enterprise was financial failure; P. T. Barnum elected president in effort to solve difficulties. He was unsuccessful but stated "general prosperity of the city had been promoted far beyond cost of entire speculation." When fire destroyed structure Oct. 5, 1858, there was no effort to rebuild.

Medals: All issues proved difficult to research. Types I and III, at least, probably were of official nature, perhaps sold within Palace during exhibitions. Today, all four medals are extremely rare. 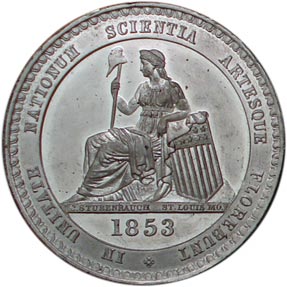 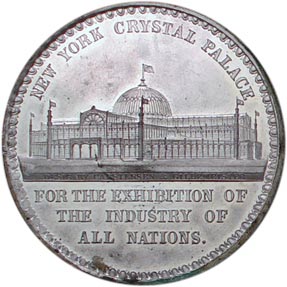 Obv. Liberty seated, facing l.; on ribbon below, small C. Stubenrauch St Louis Mo.; below 1853--all within center circle; outside, around In Unitate Nationum Scientia Artesque Florebunt * (translation: "In unity, the science, arts and wisdom of a nation will flourish."); beaded border.
Rev. Edifice; above New York Crystal Palace; below edifice, on ribbon, small Desig by Cartsensen & Gildemeister; below For the exhibition of / the industry of / all nations; beaded border. 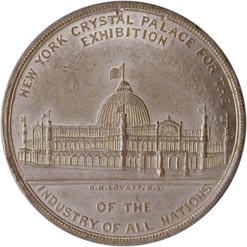 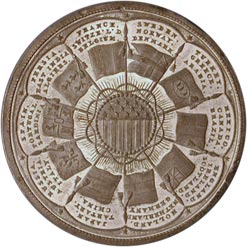 Obv. Edifice; above New York Crystal Palace for the Exhibition; below of the Industry of All Nations; beaded border. Microscopic G.H. Lovett, N.Y. under edifice.
Rev. Same as reverse of No. 7 [10 flags around shield].

Manufactured by Pinches of London, these medals are actually British and should not have been included even in the 1963 edition of this reference. Originally opened as part of The Great Exhibition of 1851, the Crystal Palace was moved after the close of the Exhibition from its original location in Hyde Park; reopened on Sydenham Hill in London by Queen Victoria and Prince Albert on June 10, 1854. Original building destroyed by fire on Nov. 30, 1936; site of current Crystal Palace Park. 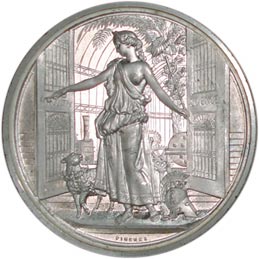 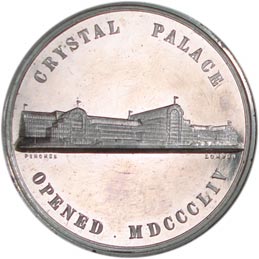