Purpose: To cement international relations and to promote reciprocal trade between Mexico and United States.

Organization: Event said to be first of its kind in our history and preparations were elaborate. President Taft and Department of State appointed Taft-Diaz Committee of Arrangements; aided by local Committee created by El Paso's Mayor and City Council. Each President was accompanied by "brilliant staff."

Medals: Official Medals below sponsored by Committee of Arrangements and City Council; engraved and "produced" by George Larcon, San Francisco. Two major reverse varieties are known, one in English and other in Spanish. Two Gold specimens were struck, one with each Reverse, English piece presented to President Taft and Spanish piece to President Diaz. Silver and Copper medals were presented to officials and guests, with those from Mexico receiving type with Spanish reverse. Latter, having been carried out of country, have greater apparent rarity within the U.S. 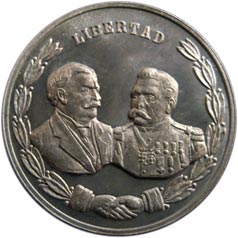 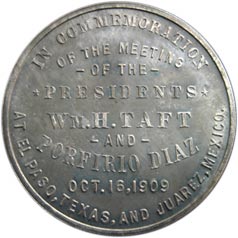 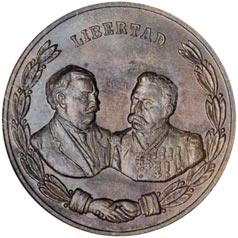 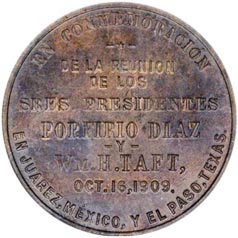