Purpose: To commemorate 300th anniversary of discovery of Hudson River and centenary of successful steamboat navigation.

In addition to tributes paid Hendrik Hudson and Robert Fulton, Commission sought "to re-stimulate interest in the important roles New York City and New York State played in American history, to inculcate in the vast immigrant population of the state a pride in their new Homeland and to promote international friendship."

Organization: Program staged by Hudson-Fulton Celebration Commission, created by 1906 Legislature; Members appointed by Governor and Mayor of New York City. At time of celebration, number of members had reached 805, including mayors of 47 other towns and cities.

Comment: Opened with Naval Parade accompanying replicas of Half Moon and Clermont up Hudson to foot of 110th Street. Here was reenacted Hendrik Hudson's landing on Manhattan Island. Highlights of following days were Reception for foreign guests at Metropolitan Opera House, three great parades (Historical, Military and Carnival), Official Banquet at Astor Hotel and dedication of permanent memorials at 15 points throughout city.

Contradictory information as to number of pieces issued in various metals appears in Elder sales catalogs, beginning 1909 and extending over many years. At one point it was stated "only 100 struck," at another "less than 50 struck" and then, "contrary to expectations, only a few were struck"--all referring to same medal. In any event, all Elder issues were quite limited.

Medals below appear frequently in those sales but no mention ever is made of any Brass piece in gold dollar size (K-76), nor is such piece known to authors. Consequently, it is not listed here. Large Silver medal alone bears edge lettering as indicated. 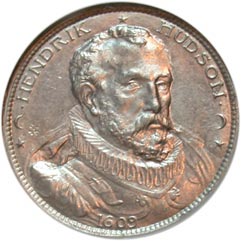 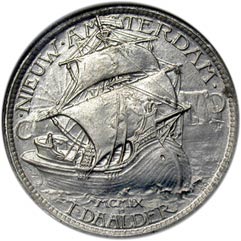 As in case of Hendrik Hudson medals above, here again Elder sales catalogs are contradictory as to number of pieces issued in various metals. Medals below appear frequently in those sales and, in sale of Oct. 8, 1909, it was stated clearly that no large Silver (K-78) was struck at all. No mention ever is made of any small Brass (K-82), small Aluminum (K-83) or large Aluminum (not listed by Kenney) and no such pieces are known to authors. None of these four medals, therefore, is listed here. Gilt, in gold dollar size, is known and now represents addition to series previously reported. Gold, in gold dollar size, is known in both matte and bright finishes. 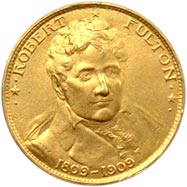 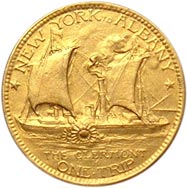 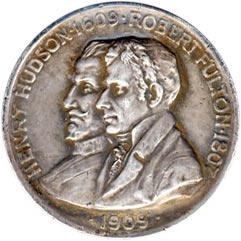 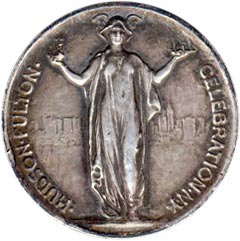 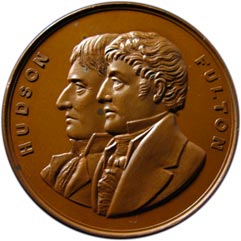 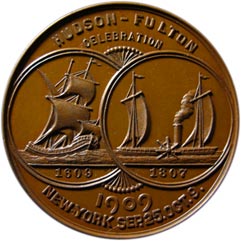 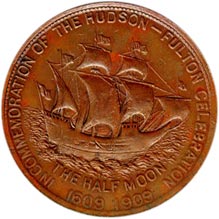 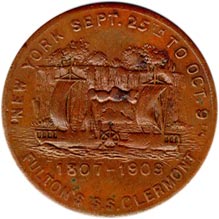 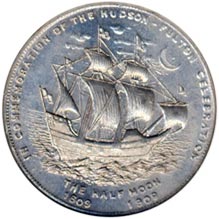 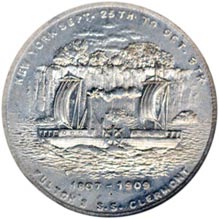 NOTE: No Aluminum, Large Letters Obv. and Rev., known to authors; also there are minor differences in dies in Bronze, Large and Small Letter varieties, e.g. "1609 1909" are closer together in Large Letter specimens.