Purpose: To promote "trade and social relations" with our Pan-American neighbors.

Site: Over 350 acres on shore of Delaware Park lake, northwest section; today an area of fine residences and parkways. Only one structure was permanent. Of white marble, it serves as library and Museum of Buffalo Historical Society.

Participants: "Every (?) state in Union and every (?) country in Western Hemisphere," with 9 states and "most" Central and South American countries erecting own buildings. Industrial exhibits numbered more than 3,500; Federal displays included Mint Exhibit.

Comment: While primarily a business and industrial enterprise, the "artistic and aesthetic permeated all." Architecture "expressed itself in the free classical style as developed in Chicago in 1893"; also "polychromatic coloring...for first time...extensively and intelligently applied to a group of pubic buildings." Progress in electricity provided new effects in illumination and there was "a wonderful electrical display."

It will be remembered that tragedy struck the Exposition and the Nation on Sept. 6, 1901. President William McKinley, 25th President of the United States, was greeting citizens late that afternoon in Temple of Music when shot down by Leon Czolgosz, anarchist terrorist. The President died Sept. 14. 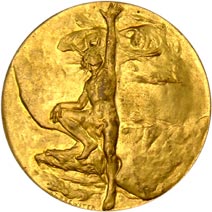 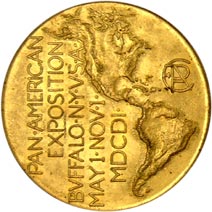 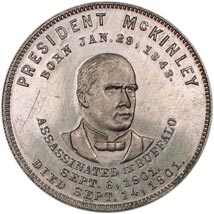 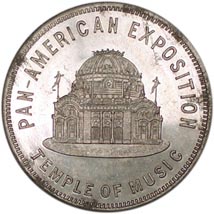 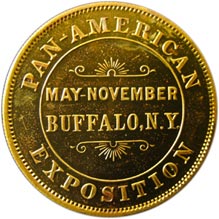