Medal was issued privately in anticipation of this exposition which never took place at all!

Exposition company chartered March 11, 1925; capitalized at $10,000,000; 95 signatories to Articles of Incorporation planned to hold "international exposition" in Portland in 1930 to which would be invited "all the peoples of the globe." Early efforts to raise $500,000 by public subscription failed; apparently late 1929 Depression proved final blow; corporation dissolved by State of Oregon Dec. 31, 1945 "for failure to appoint Attorney in Fact."

This medal falls into the class of Relic Medals as it was struck from metal of U.S.S. Battleship Oregon. Ship was berthed in Portland following World War I and operated as museum. During World War II, vessel re-activated and served in Pacific; finally decommissioned and broken up for scrap. Mast of ship stands in miniature park, S. W. Front Avenue and Oak Street, Portland.

Metal for issue apparently became available when ship first was converted to museum; local "builder" had medal struck for later sale at "exposition." Exact extent of issue cannot be determined. 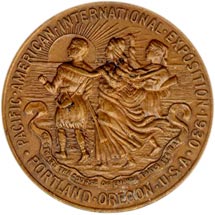 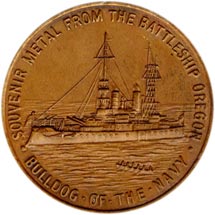 Obv. Full female figure between two full male figures, all striding and facing rear toward setting sun and ocean in background (similar to No. 325, Lewis and Clark Official Medal 1905); below, on ribbon Westward the Course of Empire Takes Its Way; above all, around Pacific • American • International • Exposition • 1930; below • Portland • Oregon • U. S. A. •
Rev. Battleship and rowboat; above, around Souvenir Metal From the Battleship Oregon; below • Bulldog • of • the • Navy •