In 1831, 80% of all employed persons in U.S. worked on farms. Reaper triggered "Golden Age" of invention of farm tools and equipment; inspired and permitted westward expansion by railroads to haul surplus grains grown for first time; released men from farms for general development of industry and for vital Civil War army service. Century later, following evolvement of reaper into twine-binder, then into harvester-thresher, one man and machines did work of 34 men; prairie states had become "granary of world."

Comment: McCormick Harvesting Machine Co. operated until 1902; then merged with 4 competitors into International Harvester Co. For centennial, Fox Motion Pictures made "Romance of the Reaper"; shown to "thousands of audiences all over the world" then and later. About 300 full-size replicas of original reaper were made, displayed widely, then donated to museums. Of lasting value were 100 university scholarships in agriculture created by McCormick family.

Medal: This was Official Medal issued by International Harvester; designed and modeled by sculptor Emory P. Seidel; nearly 1,000,000 struck by Medallic Art Co.; not sold but presented as souvenir "throughout the world." It was the desire of International Harvester that every farmer in America would have one. Today, piece is quite scarce in choice condition despite largest mintage of any So-Called Dollar. Also struck in larger version whose size precludes listing here. 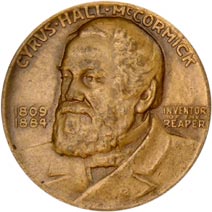 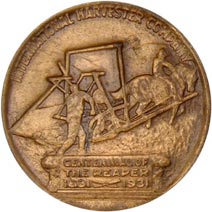 Obv. Male bust facing part l.; to l. 1809 / 1884; to r. Inventor / of the / Reaper; above bust, around Cyrus Hall McCormick
Rev. Scene depicting two men, one mounted, using horse-drawn reaper, proceeding to r.; above, around International Harvester Company; below reaper, on shield Centennial of / the Reaper / two crossed wheat straws between 1831 and 1931

On some examples the edgemark reads Medallic Art Co. N. Y. Made In U. S. A.