Purpose: To commemorate 150th anniversary of Inauguration of George Washington as our First President by "presenting a...comprehensive picture of the epochal achievements of a century and a half of modern civilization..." and to "show the way toward improvement of all factors contributing to human welfare."

Participants: All states and territories and 63 foreign countries, latter number the largest ever. Dozens of both erected own buildings. Exhibits exceeded 50,000; many Federal displays but no Mint Exhibit.

Comment: Architecture was modern in character reflecting "individual freedom of thought of those creating it." From this great exposition, and from 1933 Century of Progress Exposition, Chicago, came "cleanness of line, simplicity and color consciousness" carried over later into shops, interiors and industry. Grounds were so designed that important plaza at each entrance led to Fair's dominant feature, Theme Center or famous Trylon and Perisphere.

Medals: Both Official Tokens and Official Medals were issued. Latter designed by Julio Kilenyi, struck by Robbins Co. Sizes, 1 1/4 in. bronze & brass; 2 1/4 in. and 3 in. bronze only, preclude listing here. Token was medal and not trade token; actually, it became known as World's Fair Dollar, per below; all latter dated 1939, no 1940 issue.

Designed by H. C. Kreis, struck by Medallic Art Co. and sold by Manufacturers Trust Co. at its Exposition branch beginning June 23, 1939. Dubbed World's Fair Dollar probably because it cost $1, was silver with reeded edge and length was about equal to diameter of silver dollar. Originally intended to be round, but changed to elliptical at last minute to comply with slug laws promulgated by the vending machine industry. It is .900 fine, containing 59.06% of silver content of silver dollar. 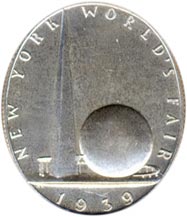 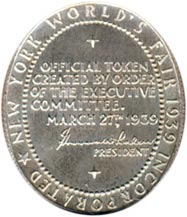 Discovered 1803 by British scientist W. H. Wollaston and named from Pallas Athena, Goddess of Wisdom, Good Fortune and Health, palladium is one of 6 precious metals of platinum group; used widely in electrical contacts, in jewelry and as catalyst. On basis of world production, palladium is slightly rarer than platinum which, in turn, is 14 times as rare as gold.

Baker states its "records...have been destroyed and all of the people...involved...have passed away"; that "most of those (medals) sold were returned eventually" for refund and later were melted down. No more 1 oz. pieces are in stock and dies have been destroyed. All medals were dated 1939, no 1940 issue. 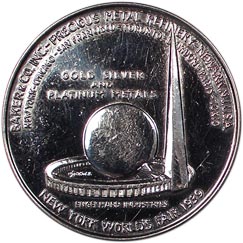 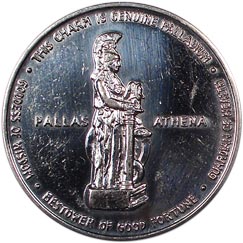 Obv. Perisphere and Trylon, with circular ramp; within ramp microscopic (c) N.Y.W.F.; above Perisphere Gold Silver / and / Platinum Metals; above all around, in two lines, Baker & Co., Inc.--Precious Metal Refinery--Newark, N. J. U. S. A. / New York--Chicago--San Francisco--Toronto--London--Paris--Tokyo; below all Engelhard Industries / New York World's Fair 1939
Rev. Statue, to l. Pallas, to r. Athena; above, around • This Charm is Genuine Palladium •; below, around Goddess of Wisdom • Bestower of Good Fortune • Guardian of Health.

Obv. Male bust facing l.; to l., around Abraham; to r., around Lincoln; below bust 1939.
Rev. Circle of 9 stars around A / Token--all within open wreath tied at bottom with ribbon; another star in open space at top between wreath tips.

Distributed as advertising piece by North Carolina Department of Conservation and Development at North Carolina exhibit at Exposition. Issue limited to 25,000 pieces donated by Aluminum Co. of America (now Alcoa, Inc.), which has plant located in state. 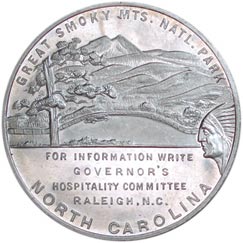 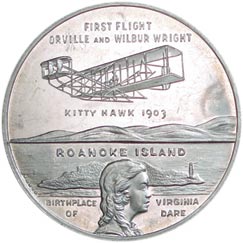 Obv. In upper half are mountains with auto parked in observation area at base; above Great Smoky Mts. Natl. Park; in lower half For Information Write / Governor's / Hospitality Committee / Raleigh, N. C. / North Carolina; at r. border is Indian head in profile.
Rev. In upper half is replica of first airplane; above First Flight / Orville and Wilbur Wright; below plane Kitty Hawk 1903; in lower half is female bust facing r. with island in background; above Roanoke Island; to l. of bust Birthplace / of, to r. of bust Virginia / Dare; to l. border, microscopic W. & H. Co.