Purpose: To celebrate openings of both Golden Gate and San Francisco-Oakland Bridges; former, "longest single suspension span in the world"; latter, "largest structure of its kind in the history of man."

Comment: Construction of island included transplanting 4,000 trees, some 60 feet tall, weighing 40 tons; architecture and landscaping combined "beauty and dramatic phases of the oriental and occidental," with lavish use of color. Called Pageant of the Pacific, in essence this was "a travel fair"; instead of stressing scientific progress itself, theme was that of culture and use of leisure made possible by industrial achievements. Prominently displayed were "vast recreational resources" of area as "spectacular background for industrial progress."

Medals: There was no dollar-size Official Medal, probably because of lack of Mint Exhibit. There was an Official Emblem or Seal, however, which appeared on many private issues. 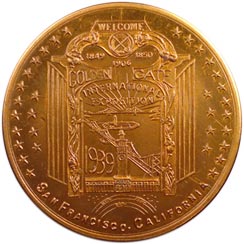 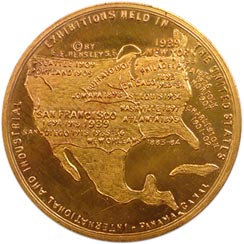 Obv. Large ornamental gate; tower in lower center foreground; bay, bridge and setting sun in background; at top of gate on ribbon Welcome / to l. 1849, to r. 1850 / 1906; on gate l. Golden, r. Gate; just below in center International / Exposition, in lower l. of gate 1939; 16 stars each side of gate outside; below gate San Francisco, California
Rev. Map of U.S., Mexico and Central America showing cities and dates of previous Expositions; above map l. microscopic (c) by / E. E. Hensley S. F.; outside map around International and Industrial Exhibitions Held in the United States; below, at Canal Panama Canal 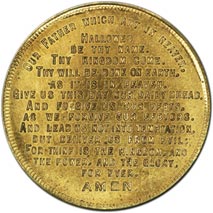 Obv. Official Emblem, per description under Medals above, but no Pat. / D--110016; beaded border.
Rev. Complete Lord's Prayer in 15 lines across, ending in The Power, and the Glory, / Forever. / Amen.; beaded border. 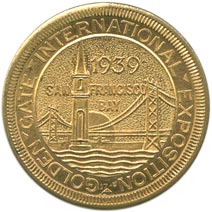 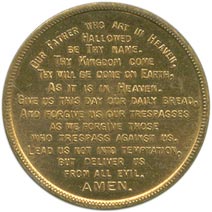 Obv. Same as obverse of No. 479 [Official Emblem].
Rev. Lord's Prayer in 14 lines across, ending in But Deliver Us / From All Evil. / Amen; beaded border. 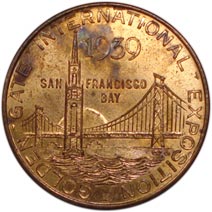 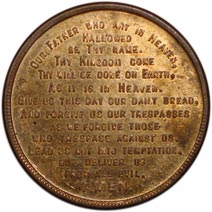 Obv. Similar to obverse of No. 479 but Official Emblem is not contained within any center circle; also 1939 is much larger; no beaded border.
Rev. Same as reverse of No. 479a [Lord's Prayer, Catholic].

NOTE: There are die varieties known of both types I and II (both pieces) without beaded border reverse. 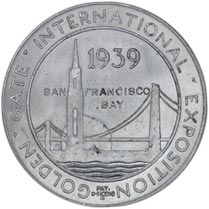 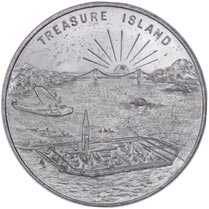 Distributed by Petroleum Exhibit on grounds. 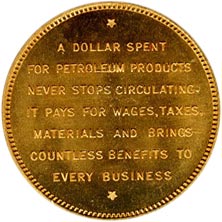 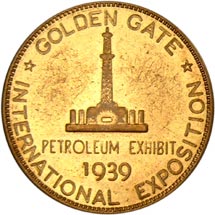 Obv. Oil drill in center; below Petroleum Exhibit / 1939; above drill, around * Golden Gate *; below all, around International Exposition; beaded border.
Rev. Same as reverse of No. 483 [A Dollar Spent].

Little information can be developed on this issue. Apparently sale planned for 1939 and possibly 1,000 struck; however, "late delivery" resulted in sale of only 150 to 400 for $1 each; remainder of issue melted down. 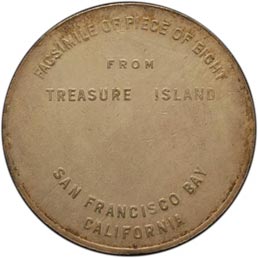 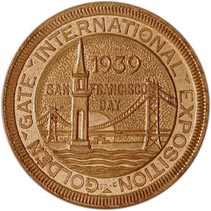 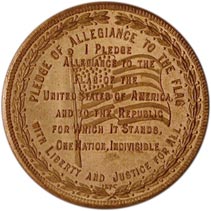 Obv. Same as obverse of No. 479 [Official Emblem].
Rev. Superimposed on American Flag in background, at top around, is Pledge of Allegiance to the Flag; then Pledge itself in 8 lines--all within wreath; beaded border.

Designed and issued by Jules Louis Charbneau, San Francisco fine arts appraiser and dealer. Total pieces struck, both years, 2,500 Gold, sold for $5; 500 Silver and 50 Copper, sold for $1 each. There were two Gold and Silver issues, one dated 1939, other 1940 but it cannot be established if Copper was also struck each year. Sale was disappointing and bulk of entire issue was melted down. Reverse bust of Pacifica, "Queen" of fair, taken from her full statue, located on grounds at entrance to Cavalcade of the Golden West exhibit. 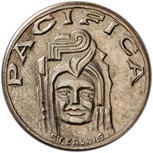 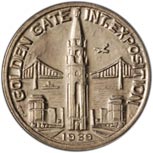 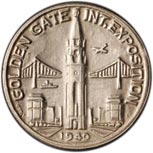 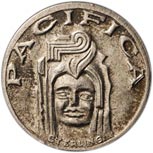 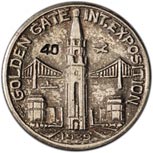 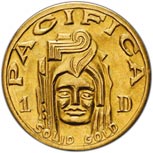 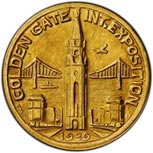 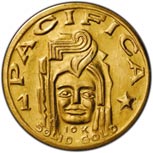 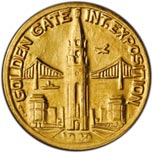 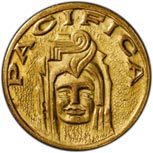 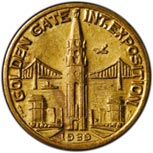 Obv. Same as obverse of No. 487 [Tower and exposition grounds].
Rev. Similar to reverse of No. 487 [Large head, of sculptured or idol type, facing front] except no legends below or to sides of head.

TOWER OF THE SUN DOLLAR 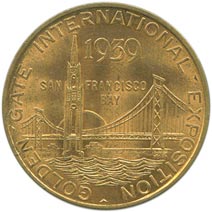 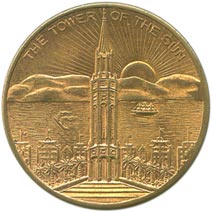 Obv. Same as obverse of No. 480 [Official Emblem without enclosing circle].
Rev. Tower; Bay, mountains and sun with rays in background; above all, around, The Tower of the Sun