The Montana Silver Association, with headquarters in Helena, Montana, had as its purposes "To unite and encourage, through organization, those who believe in the restoration of silver in the monetary system of the United States and other leading powers throughout the world; to collect and disseminate information on the silver subject; to bring united and effective action in every legitimate way for the purpose of bring-ing about the enactment of appropriate legislation to further the use of silver in our national currency; to seek coordination in any and all organizations representing various branches of industry, crafts, professions and commerce, which would be directly or indirectly benefited by the restoration of silver and thereby provide employment for thousands of miners, as well as thousands of others engaged in the production of timber, oil, coal, explosives and other supplies, which in turn would call for greater employment of those engaged in the transportation of the ores, concentrates, bullion and in addition the great volume of supplies enumerated as essential to the mining industry."

Frank H. Cooney, Montana governor, and J. E. Erickson, U.S. senator, were prominent among members of the advisory council. Council and board of directors were composed of U.S. congressmen, state senators and representatives and other state, college and private industry leaders.

As a means of financing its activities the organization adopted a silver medal, to be issued to members instead of a membership card upon payment of $1 dues. The medal contains one troy ounce of silver, .999 fine. Net profit to the association was about 55 cents after silver and die costs had been paid. According to C. R. Brazier, organization secretary, 2225 medals were ordered struck, with initial shipment consisting of 300 pieces; distributed by Union Bank and Trust Co., Helena. Actual number of pieces issued cannot be established, but many medals were melted. 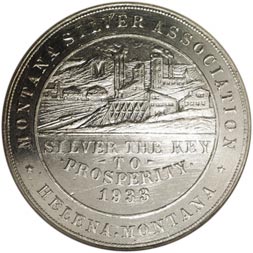 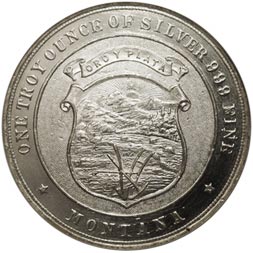