Fifty years later, five history-minded private citizens met on river front, First and Walnut Streets, St. Louis. "There, in solemn conclave, they raised brimming glasses of champagne and drank a lonely toast to the westward course of empire." Two congratulatory telegrams were read aloud and participant delivered brief outline of great events once sanctifying spot on which celebrants stood. Ceremonies were concluded by "fireworks display of three bombs and three skyrockets, one of each for each fifty years of history," three of these misfiring. Thus St. Louis commemorated sesquicentennial of most important event in its history.

Apparently there was talk at one time of staging another World's Fair in 1953 but nothing developed. Issuer "decided event merited at least a privately struck medal of some kind" and unable to secure "any cooperation...went ahead with it" himself as "patriotic gesture." Issue limited to 5,000 pieces in pure Copper; sold for 50 cents. 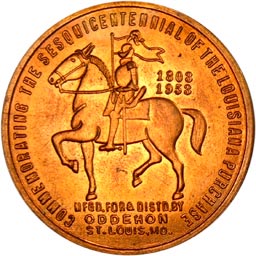 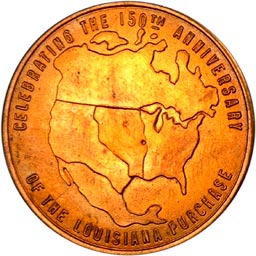