Purpose: To honor 200th anniversary of Albany Congress of 1754, historically the First American Congress, at which Benjamin Franklin presented first plan of Federal Union, authentic forerunner of Articles of Confederation of 1776 and of U.S. Constitution of 1787.

Comment: Significantly, "Unity" was theme of city-wide church services on opening Sunday. "Cradle of the Union" pageant presented during week, depicting events leading up to this First American Congress, its organization and adoption of Plan of Union June 24, 1754. Other highlights included State Dinner, Colonial Ball and Commemorative Ceremony itself.

Medals: Official Medals authorized by 83rd Congress; designed by Stanley LeNoir, struck at Philadelphia Mint. Issue limited to 50 Gold (.900 fine), 1,250 Silver (.925 fine) and 4,000 Bronze; sold from Celebration Headquarters, Albany for $68.75, $3.50 and $1.50, respectively. Reverse design is based on Ben Franklin's famous cartoon first published in Pennsylvania Gazette March, 1754, and reprinted continually thereafter up and down the Colonies. 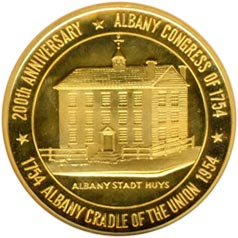 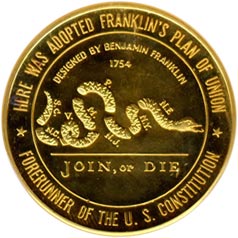 Obv. Edifice, below Albany Stadt Huys--within circle; outside, above around * 200th Anniversary * Albany Congress of 1754 *; outside, below around 1754 Albany Cradle of the Union 1954
Rev. Across center to r., serpent in segments, each segment marked with initials of the 7 Colonies and New England, i.e., S.C., N.C., V., M., P., N.J., N.Y., and N.E.; above Designed by Benjamin Franklin / 1754; below serpent, a line across; below line Join, or Die--all within center circle; outside, above around * Here Was Adopted Franklin's Plan of Union *; outside, below around Forerunner of the U. S. Constitution.