Purpose: To commemorate centennial of first shipment of cotton from United States to England and to advertise cotton industry, encouraging wider use of that staple.

Organization: National Cotton Planters Association was original sponsor. In May, 1883, Congress created National Commission with authority to select site. New Orleans business leaders immediately chartered Exposition Co.; secured commitments to $225,000 of stock, then difficult feat for any southern city. There being "no competition for the honor" and "because of public opinion," Commission quickly selected New Orleans as site. City and State granted $100,000 each; Congress $1,000,000.

Participants: Southern "cotton" states most prominent with many erecting own buildings; additional ones represented on more limited basis along with 22 foreign countries. Numerous Federal displays included a Mint Exhibit.

Comment. 76 acres "under roof." Main building, 2178 ft. by 905 ft., was architectural marvel of its day. Electric lighting, barely born, was one of wonders of exposition; Liberty Bell, popular exposition item, was on display. 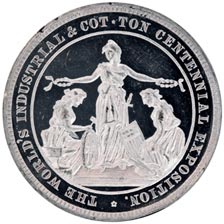 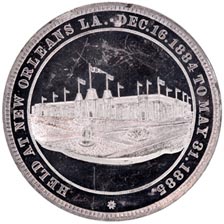 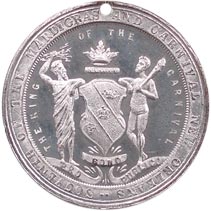 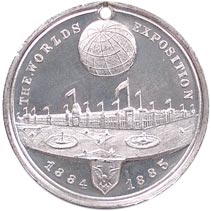 Obv. Seal of the Mardi Gras, around The King of the Carnival--all within beaded central circle; outside, around Souvenir of the Mardigras and Carnival New Orleans.
Rev. World globe in upper center; edifice and grounds below; on truncation of grounds microscopic E A K [medalist Edward A. Kretschman] to left and Phila to right; above all, around The Worlds Exposition; below 1884 1885 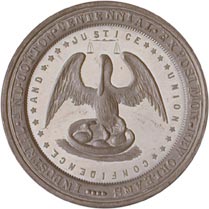 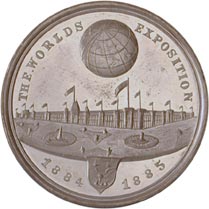 Obv. Pelican on nest, around **** Union **** Confidence **** and **** Justice--all within beaded central circle; outside, around Industrial and Cotton Centennial Exposition New Orleans.
Rev. Same as reverse of No. 143 [World globe over edifice]. 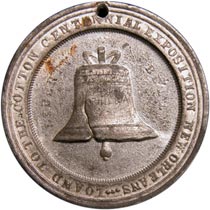 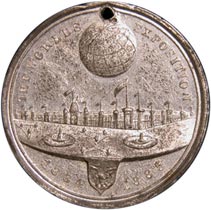 Obv. Liberty Bell, to l. Liberty, to r. Bell--all within beaded central circle; outside, around Loaned to the Cotton Centennial Exposition New Orleans.
Rev. Same as reverse of No. 143 [World globe over edifice]. 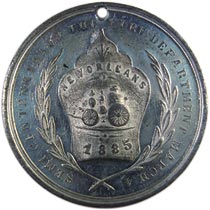 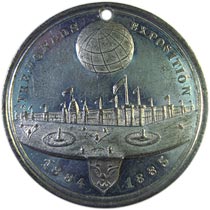 Obv. Fire engine, above New Orleans, below 1885--all within shield surrounded by wreath; outside, around Semi centennial of the Fire Department March 4.
Rev. Same as reverse of No. 143 [World globe over edifice]. 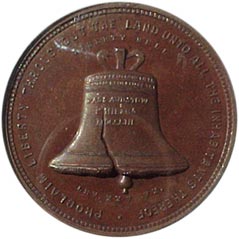 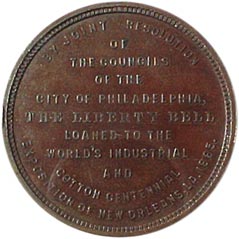 Obv. Similar to obverse of No. 23 [Liberty Bell] except no year on l. or r. of Liberty Bell.
Rev. In 11 lines, first and last two curved, others straight By joint resolution / of / the Council / of the / City of Philadelphia. / The Liberty Bell / loaned to the / World's Industrial / and / Cotton Centennial / Exposition of New Orleans 1885. 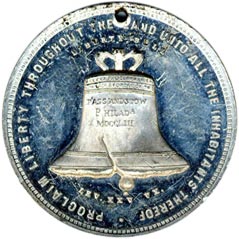 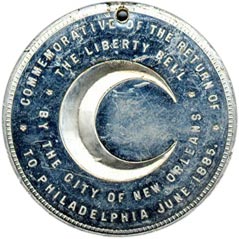 Obv. Same as obverse of No. 144a [Liberty Bell].
Rev. Crescent in center, above around Commemorative of the return of / the Liberty Bell below around by the City of New Orleans / to Philadelphia June 1885.