Medal commemorates 100th anniversary as territory, not Statehood, Wisconsin having been admitted to Union May 29, 1848. Legislature created Wisconsin Centennial, Inc. 1933 with $500 appropriation, later increased. Celebration was state-wide, highlight being presentation of pageant, "Centennial Cavalcade of Wisconsin," in stadium of University of Wisconsin, Madison, June 27-July 5, 1936; "witnessed by at least 75,000 spectators."

This was official medal, sponsored and designed by Commission; 1,500 pieces struck in Bronze; sold for $1. 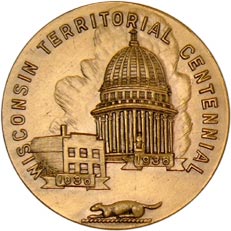 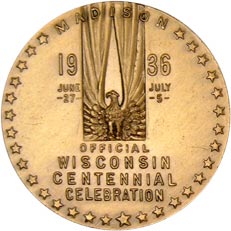 Obv. Capitol building, clouds behind; at base on small ribbon 1936; smaller edifice to l.; at base, on small ribbon 1836; above all, around Wisconsin Territorial Centennial; below all is prone animal (badger?) on dotted line.
Rev. Eagle in upper center panel; to l. 19 / June / 27, to r. 36 / July / 5; above at border Madison; below panel Official / Wisconsin / Centennial / Celebration; stars all around at border.