The General Assembly is composed of five main bodies: Security Council, International Court of Justice, Secretariat, Economic and Social Council and Trusteeship Council. Its five principal committees are Political, Economic, Social, Legal and Administrative. It is the right of every member to be represented on each committee. 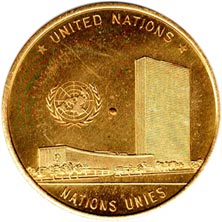 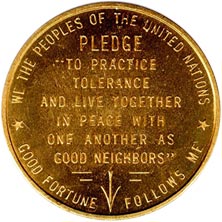 Obv. Edifices and grounds, scroll to left of center dot; above, * United Nations *; below, Nations Unies
Rev. Top legend, around, We the Peoples of the United Nations; in seven lines, center, Pledge / "To Practice / Tolerance / and Live Together / in Peace with / One Another as / Good Neighbors"; below, arrow, pointing to bottom edge, near which is legend around, * Good Fortune Follows Me * 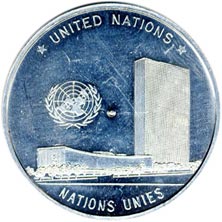 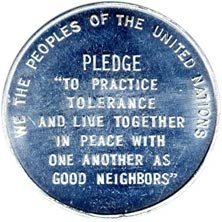