Medal struck for dedication of Breakwater; issuer and designer unknown but struck by Los Angeles Rubber Stamp Co. (later LA. Stamp and Stationery Co., which went out of business in the 1960s). Actually, two dedicatory ceremonies held, marking both beginning and completion of project, March 25, 1933, and Aug. 5, 1934, respectively.

Some medals have no figure after L.A.R.S. on reverse; most bear figure 1 to 14, significance of which unknown to authors. Six obverse die varieties known have no relationship to figures. 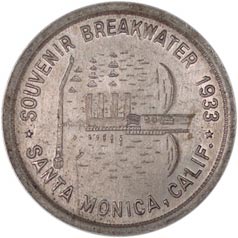