As early as 1517-1529, surveys had been made for canal across Isthmus of Panama but Spaniards continued to sail 8,000 miles around South America or to haul gold and cargos on stone highways across Isthmus. Beginning 1880, two French ventures failed at cost of $300,000,000. Following our purchase of French rights, rebellion and secession by Panama from Colombia in 1903 and our intervention and guarantee of Panama's independence, Canal Zone granted to U.S. in perpetuity; ratified 1904. Ten years and $340,000,000 later, Canal was opened formally Aug. 15, 1914. Panama Canal Treaty (Torrijos-Carter Treaty), signed Sept. 7, 1977, "relinquishes American control over the canal by the year 2000 and guarantees its neutrality." Canal fully transferred to the Republic of Panama on Dec. 31, 1999. 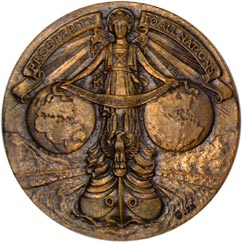 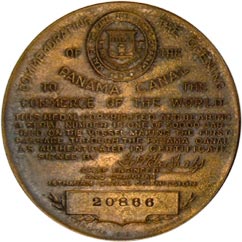 Obv. Involved design depicting boat passing through Canal, full female figure standing on prow, long rays from head and shoulders, arms outstretched; each hand rests on a world globe (eastern and western hemispheres); on ribbon, across body, connecting globes Oceani Inter Se Columbid Coniunguntur (translation: "Columbia unites the oceans"); above on ribbons, at head of figure, to l. Prosperity, to r. To All Nations; at lower r. edge, microscopic © J. F. N.
Rev. At top Seal of Canal Zone; around top Commemorating the Opening, across of (Seal) The / Panama Canal / to the / Commerce of the World / smaller This Medal Copyrighted and Bearing / A Serial number is one of 50000 Car / -rried on the Vessel making the First / Passage Through the Panama Canal / as Authenticated in Certificate / Signed by / (signed) Geo. W. Goethals / Chief Engineer / and Chairman / lsthmian Canal Commission; below this is serial number (incuse) on panel or ribbon; below around microscopic Copyrighted 1913 J. F. Newman