Purpose: To celebrate, with "wholesome fun, spontaneous gaiety and feasting," season just prior to Lenten period of fast; termed by visitors "greatest free show on earth."

With advent of Mardi Gras proper, street parades and pageants take over, night and day. Rex organization selects Rex, King of Mardi Gras, always some outstanding civic leader, usually a member of the Boston Club (old conservative and Christian club). The Queen of Rex Carnival (almost always a debutante) and the Maids of the Rex Court are known as the "Carnival Court"; no other organization entitled to use that designation. Holds parade on Mardi Gras day, Shrove Tuesday; holds ball that night, bringing entire celebration to close. 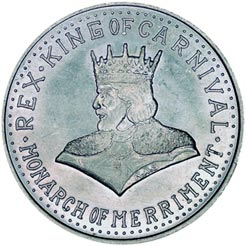 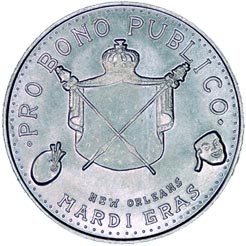 Obv. Crowned head and bust l., with letters H.A.S in exergue on r. base of bust; above Rex King of Carnival; below bust, around Monarch of Merriment; beaded border.
Rev. Coat of Arms of School of Design; at lower l. is artist's palette with brushes; at lower r. is face mask; above coat of arms • Pro Bono Publico •; below coat of arms New Orleans / Mardi Gras; beaded border.

Restrikes of the gold and plain were reproduced in the 1970's and were known as the NORD (New Orleans Recreation Dept.) restrike or fake. There are ways to tell the difference between the originals and the restrikes. While the original strikings were very crisp, the restrikes show a loss of detail, particularly in the beading on the obverse and reverse. Additionally, the reverse exhibits many "bumps" or "mumps" in the shield and fields.

To tell the difference between the original strikes and the NORD restrikes, examine the back of the doubloon. On the original, the cloak has small pit-looking marks as if the black spots on a white fur. On the restrikes, the pit-looking marks are not restricted to just the cloak but extend across the entire reverse. Also, the rim on a 1960 original strike is full, while on must restrikes the bottom rim is found to be weak. The restrikes are known in both Gold and Silver. NOTE: The original 1960 undated Gold also has a very slight waviness on the surface of the doubloons.