Purpose: To celebrate 100th anniversary of Statehood and ‘to preserve in fitting form a memorial to the history of the state; to foster among the people a pride in that history."

Comment: Celebration consisted mainly of military and civic parade and oratory; in attendance were U.S. Secretary of State Knox, Governors of Alaska and Mississippi and diplomats from 9 European and Central American countries. Ceremonies held at Cabildo, Presbytery and state museum buildings; children's program in Jackson Square; banquet at Grunewald Hotel. Important feature was formal opening of State Museum of History and Commerce.

Medal: This was Official Medal; designer and number struck unknown. 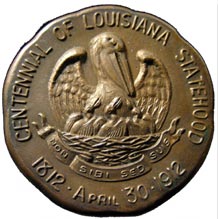 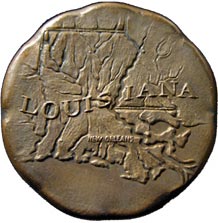 Obv. Pelican feeding its young; below, in streamer Non Sibi Sed Suis (one of state's mottos; translation: "Not for himself but for others"); above, around Centennial of Louisiana Statehood; below, around 1812--April 30--1912
Rev. Relief map of Louisiana; across, in curved line Louisiana; location of New Orleans marked New Orleans