First of two separate Ku Klux Klans was a secret political organization begun in South during reconstruction period following Civil War. Southern whites united to overthrow "Carpetbag" and Negro suffrage governments and to oppose Congressional reconstruction measures; Federal Union was model for its organization. Its constitution was adopted in 1867; period of greatest activity was 1868-1870, then it declined.

Knights of the Ku Klux Klan, second organization, was a fraternal order started on Stone Mt., near Atlanta, GA, in 1915 by William J. Simmons. Chartered by the state of Georgia, membership was said confined to American-born Protestant whites; "brotherhood of man, protection of womanhood, white supremacy, real patriotism and pure Americanism" were principles to which it was dedicated. It was not sectional, as was first KKK, but nationwide; had about 100,000 members by 1921. Effective at polls in 1922, 1924 and to some extent 1926 elections; declined by 1928, probably because of corruption and abuses of power. 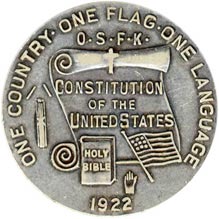 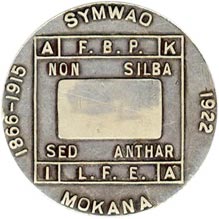 Obv. Scroll, on which are cross, Constitution / of the / United States, Holy Bible and American Flag; hand between Bible and flag; above scroll, O.S.F.K.; below in exergue, 1922: to l., bundle of sticks; legend around, One Country • One Flag • One Language
Rev. Square design, small squares in corners contain A, K, I and A; between top corner squares F.B.P.; between bottom squares L.F.E.; above rectangle in square center Non Silba; below rectangle Sed Anthar; above square Symwao; to r. 1922; below Mokana; to l., 1866-1915 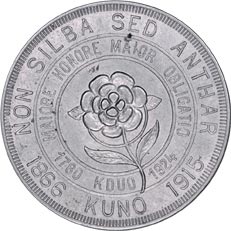 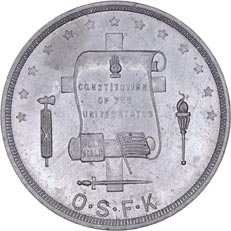