Alongside the Hudson River, on New York City's Riverside Drive at 122nd street, stands Tomb of Ulysses S. Grant (1822-1885), 18th President of the United States and Mrs. Grant (1826-1902). Designed by Edward Casey, Tomb is white granite, formal Roman-style mausoleum, 165 ft. tall, costing over $600,000. Construction started 1891; dedicated by President William McKinley April 27, 1897. Some authorities feel Tomb "suffers as a monument in his honor through comparison with that of Napoleon, which it invites." Maintained by city for over 60 years, National Park Service of U.S. Department of Interior finally accepted maintenance in 1958.

Either or both medals below probably were of official nature. Memorial was financed by public contributions and considerable revenue was derived from sale of medals and other souvenirs. 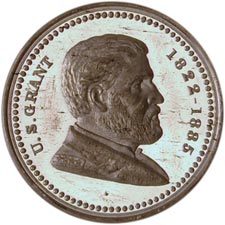 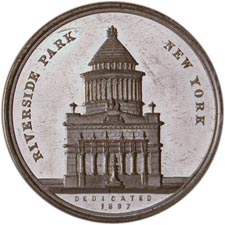 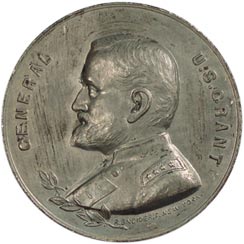 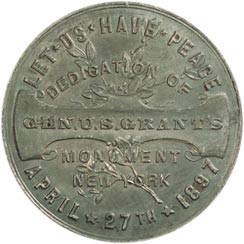