Germantown, settled by emigrants from "Fatherland" and once separate municipality, later became part of Philadelphia. This was one of two Official Medals designed and issued by Celebration Committee; struck by William H. Warner & Bro., Philadelphia. Obverse of other piece was somewhat similar to this reverse but medal struck in pewter, 32mm, which latter precludes listing here. Issue below was quite limited in both metals. 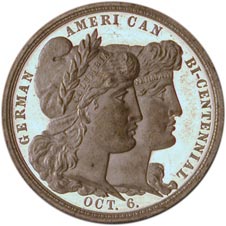 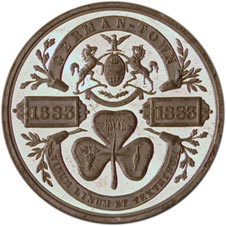 Obv. Two conjoined female heads facing r., on one headband Columbia, on other German; above, around German American Bi-Centennial; below busts Oct. 6.; beaded border.
Rev. On curved ribbon, at top, with sprays at each end German-Town; below is Seal; below, on shield to l. 1683, on shield to r. 1883; in lower center is three-leaved clover with vine in l. lobe, flax in upper lobe and ancient loom (?) in r. lobe; below, on curved ribbon with sprays at each end Vinum Linum Et Textrinum (translation: "Wine, linen and weaving"); no beaded border.