New Yorker Henry Grinnell fitted out three such rescue efforts beginning 1850, Dr. Kane being member of first and commander of second Grinnell Expeditions. They did reach 80 N, named area Grinnell Land but failed in principal objective. Later it was established that Franklin died in Arctic June 11, 1847. While British erected monument to him as "discoverer" of Northwest Passage, this was not verifiable. First man to take ship through passage was Roald Amundsen (Norway) in 1903-05.

It is obvious, of course, that these medals were not issued until after Dr. Kane's death; no doubt struck to commemorate either his death or his expeditions; engraved by William H. Key; issuer unknown. 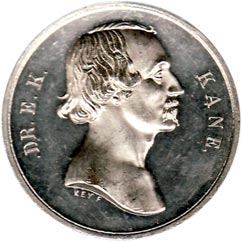 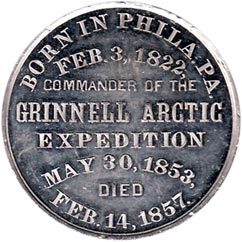