COLORADO "RUSH TO THE ROCKIES" CENTENNIAL
1959

Purpose: To commemorate 100th anniversary of first mass settlement of state following discovery of gold in 1859 in Central City, once "richest square mile on earth." Included were centennial celebrations of 19 cities including Denver and Colorado Springs.

Organization: This was not a "World's Fair"; rather, "in each town events were offered which "re-created pioneer days, illustrated growth of state and provided unique entertainment." Denver acted first; Council created Centennial Commemorative Authority 1955; Legislature created Centennial Commission January 1958 to coordinate state and local observances; similar Committees established in most communities. State granted $125,000 but mere $70,000 spent as this was described officially as "Do-It-Yourself Celebration" actually costing residents of state "only about 4 cents each."

Medals: Official Medal below authorized by 86th Congress; struck at Philadelphia Mint. Obverse is Official Centennial Emblem designed by Arthur Roy Mitchell, Trinidad, Colorado; modeled by Frank Gasparro. Issue limited to 10,000 pieces; sold out for $3.50 "before end of August 1959." Congressional designation as a "national medal" permitted striking of additional number "upon approval of issuing Commission" but Governor Steve McNichols personally advised on April 11, 1960, that no more medals would be struck. 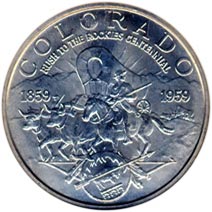 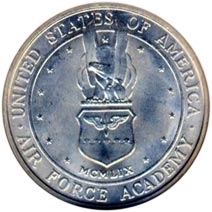 Obv. Covered wagon scene; small circle below containing a buffalo, long arrow across to r.; above all Colorado / Rush to the Rockies Centennial; to l. 1859, to r. 1959.
Rev. Seal of Academy, 13 stars around, below MCMLIX--all within center circle; outside above around • United States of America •, below Air Force Academy.

Privately issued as centennial souvenir; about 5,000 struck and sold for $1. It was reported that several major varieties appeared but this is only type actually known to authors. 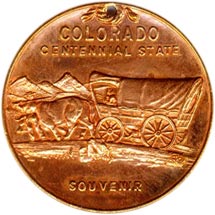 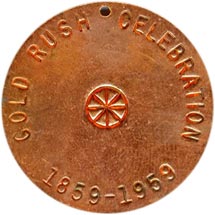 Obv. In center is nugget or lump of simulated gold; above, around Gold Rush Celebration; below 1859--1959
Rev. Covered wagon drawn by oxen proceeding l.; above, at border, is small wreath / Colorado / Centennial State; below wagon Souvenir

Apparently struck originally in effort to interest towns, cities, merchants and others in using reverse for individualized purposes; few such known. Issue was quite limited. 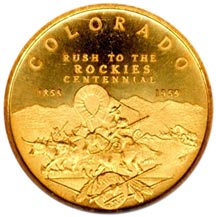 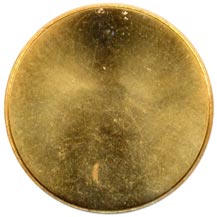 Designed and issued by Leroy H. Bisterfeldt, Denver; 19,000 Nickel-silver and 101 Gold specimens struck. Of former number, "about 10,000" were sold as medals for $1 through U.S. National Bank, Denver, sole distributor; "about 4,000" were made up into bolo ties, tie clasps and other centennial novelties; balance of 5,000 Nickel-silver then stored.

Issuer advised that each Gold medal come from placer mine nugget of pure Montana gold, cold-rolled to avoid violation of Federal statutes; that no Gold medals ever had been released up to December, 1961. It was contemplated then that these gold specimens might be available "in a couple of years." While dies apparently have not been destroyed, it was asserted that "no more medals of any kind ever will be struck." 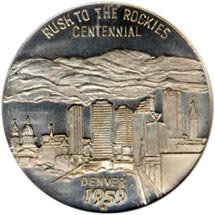 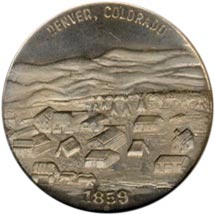