Medal is smaller replica of three-inch Official Medal; latter authorized by Medal subcommittee of Mayor's Catskill Aqueduct Celebration Committee; issued by American Numismatic Society; designed and modeled by Daniel Chester French, sculptor. Official Medal was subscription issue, not struck but cast, limited to 12 Silver and 57 Bronze pieces. Society "had no association" with striking of these replicas by Medallic Art Co.; issuer and number struck not known.

In 1933, president of the Medallic Art Co., Clyde Curlee Trees, choose the obverse of this medal as firm's logo and included it on stationery, in advertising and even on nameplates attached to plaques. Firm retained the logo throughout the years and it is still in use by successor company Medallic Art & Mint. 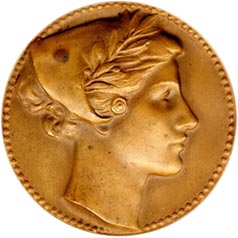 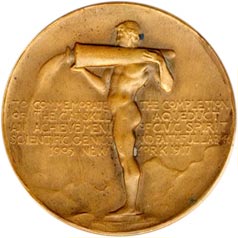