While Elder sales catalogs, 1909 to 1912, provide somewhat contradictory information as to extent of issue, it obviously was very limited. Not more than 75 Silver and 225 Aluminum pieces were struck; sold for $2.25 and $1 respectively. Bronze medals, only 6 to 8 in number, apparently were trial pieces, not placed on public sale. 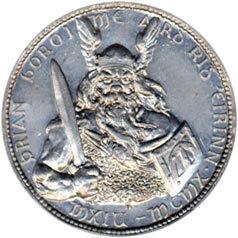 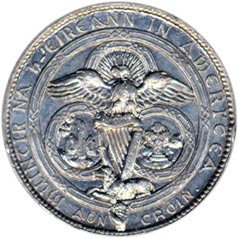 Obv. King Brian Boru facing, holding sword in r. hand; above around, in Celtic Brian Boroime Ard Rig Eirinn (Brian Boru, High King, Erin); below MXIV-MCMX (1014-1910); microscopic H above dates; beaded border.
Rev. An involved Celtic design in form of a shamrock; in upper leaf (or circle) is sunburst of ancient flag of Ireland; in lower l. leaf is a ruined abbey and round tower; in lower r. leaf is miniature of a Celtic cross; superimposed on center is spread-winged American eagle resting talons on an Irish harp, below is a reclining Irish wolfhound--all within large decorated circle; outside, below circle, supporting stem of shamrock and base of harp, is the "red hand" of the arms of Ulster; hand separates AON (one) and Croin. (crown); legend around, in Celtic, Muintir Na H'eirann in Ameri'cea (the people of Ireland in America); beaded border.